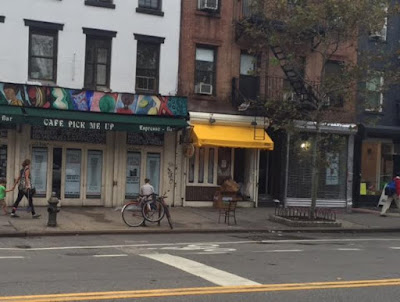 A Venezuelan restaurant called Arepa Factory is opening at 147 Avenue A just north of East Ninth Street... EVG contributor Steven, who took these photos of the awning and signage that arrived today, noted that workers on the scene are aiming for an opening as early as Sunday... 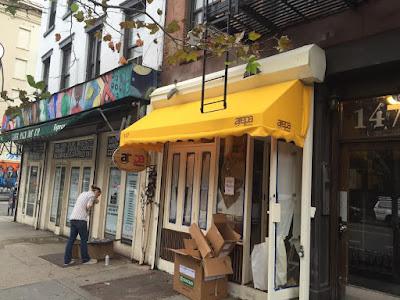 The storefront used to be part of Café Pick Me Up, which decamped to join the Gnocco space on East 10th Street back in June. Café Pick Me Up was housed at 145 and 147 Avenue A, and they had two different landlords. (Icon at 145 and Croman at 147. No. 145, the corner space, remains on the market.)

No word at the moment who's behind Arepa Factory...

More about the new Café Pick Me Up-Gnocco combo on East 10th Street
Posted by Grieve at 3:26 PM

Will there be a zoning issue with having a factory in a residential area?

Oops. Thanks. I had my north and south mixed up today...

This is interesting. I assumed the owners would combine the two spaces and charge a bank or a Starbucks some insane rent. Well, for all we know, the Arepa Factory people are paying an insane rent. I guess we should be happy a small business is opening and not a chain!

Owners were tied in to the Cafe Pick Me Up, I believe, and are most likely under that same continuing lease with Croman. Icon brought down the Cafe with an insane lease renewal amount.

Caracas is really close to this and looks to do pretty well. Is the market mass for arepa lovers that big to support another arepa business, excuse me, factory? We'll see.

The white building on the corner, I'm told—the ICON-owned one that used to house Café Pick-Me-Up—used to be a wine factory, or possibly just had a wine cellar. I don't know the year, and maybe it was during Prohibition. Does anyone else have any info on this?