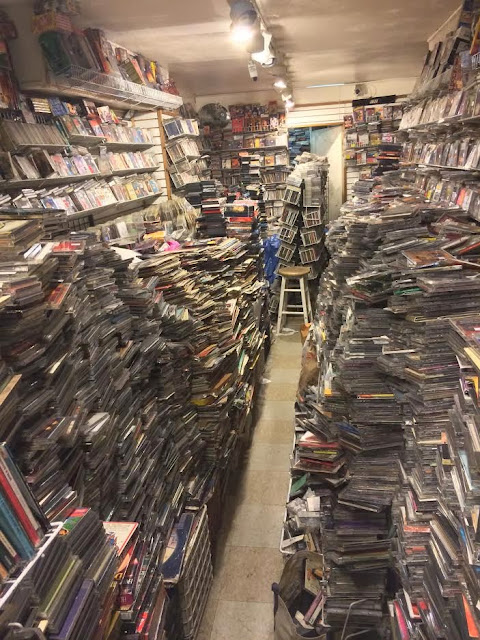 As you may have heard, the Birdman, who works amid the stacks of used CDs, videos and cassettes at Rainbow Music, is retiring and closing his 17-year-old store at 130 First Ave. between St. Mark's Place and East Seventh Street at the end of the month.

The Times today has more about his decision.

“I don’t need the aggravation anymore, and this is aggravation,” he said, looking around at the clutter. “It kept me busy, but now I’m tired.”

He estimates that he has crammed 250,000 CDs and perhaps 50,000 more video and audiocassettes into the small space. Just to enter the store, at 130 First Avenue ... seemed to risk setting off a cascading avalanche of thousands of plastic cases.

“The store is so jammed, people are amazed by it, but then they see I got good stuff,” he said. “I can dig out anything I want. The thing is, I just don’t want to dig anymore.”

To date, the Birdman has never revealed his name, not even for Jessie Auritt's 10-minute short about the store...

However, in the Times, he "reluctantly confirmed that his given name was Bill Kasper."

I'm sure it wouldn't be hard to find out his name. It has to be registered as the store's owner.

Enough of this guy. Like Sounds and Norman's Sound & Vision he never carried underground music (vinyl, cassettes, cds, demo cassettes, demo cds) by local/area bands. Big deal a record store which carried stuff you could buy on Ebay, Amazon, Discogs, and many other sites carrying used mainstream and big indie record label releases closed. If this guy had supported local/area bands who play Lit Lounge, Mercury Lounge etc. (live music venues in the immediate area) ok, sad his store is closing but he didn't, and I/others could care less.

I never searched for music here for fear of inadvertently triggering an avalanche. My question is, how and why did the FDNY turn a blind eye to the hazardous, hoarder-like conditions inside the store?

Anonymous 7:04, This neighborhood, despite the gentrification of the past few decades, is still dangerously decrepit. Building supports are sagging, gas lines exploding... The next decade is going to see a lot of fixing of these problems, I predict.