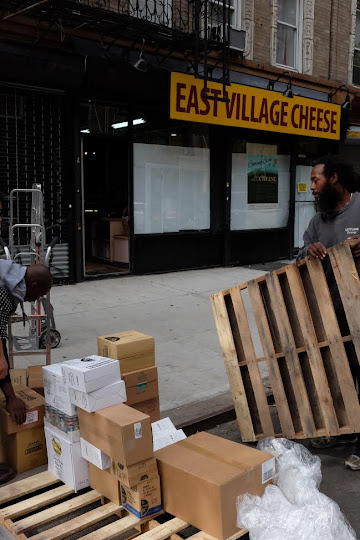 While the space had been under renovation in recent weeks, we hadn't heard about an opening date just yet.

The shop's lease at 40 Third Ave. between East Ninth Street and East 10th Street was up at the end of July, with its former neighbor Duane Reade eventually expected to expand into the adjacent storefronts.

Word is now Tuesday, Sept. 29 for the opening…

[Updated] Confirmed: East Village Cheese will be moving to Avenue A later this year

Looking at the incoming East Village Cheese shop on East 7th Street
Posted by Grieve at 4:15 AM

Cool, another East Village Cheese story. It's been... what? Two days since the last one?

9 days! And we didn't know the opening date then.

But what about Black Seed Bagels?! What are they doing today??? ;)

OUR LONG NATIONAL NIGHTMARE IS OVER

More importantly, what ever happened to Ess a Bagel reopening?

Finally, some gouda news. I was feeling bleu earlier but now I'm grate.

Sweet dreams are made of cheese. Who am I to dis-a-brie?

lzF - you read that off the same wine bar sandwich board that I did and you know it!