Martha Cooper's Kids of the Lower East Side 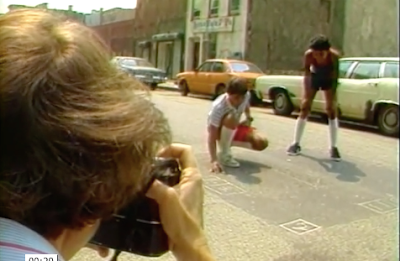 An exhibition called "Kids" continues through Oct. 4 at the Dorian Grey Galley on East Ninth Street.

There are two artists with works featured — photographer Martha Cooper's Street Play and sculptor John Ahearn's Walton Avenue life casts. (The exhibit has been up since Sept. 10 — I only just had the chance to see it.)

I'm particularly interested in Cooper's work. Here's more about her via Dorian Grey:

From 1977-1980 Martha Cooper was a staff photographer on the New York Post. On her way back to the paper at the end of the day, she began driving through Alphabet City on the Lower East Side, looking for photos to use up the leftover film in her cameras.

Her shots captured streets filled with freely roaming children immersed in creative play. These photos have been called some of the most exuberant and memorable photographic depictions of youth and ultimately lead to her documentation of graffiti and emerging hip hop.

There's a 6-minute documentary – originally produced for MacNeil/Lehrer Newshour in 1984 — showing Cooper at work in the neighborhood... You can watch it at Vimeo here.

The video is great.

Martha Cooper's photographs are really remarkable, the kids seem unaware of her presence.
She really caught them playing and wild, not posing. Juxtaposed with the sculpture by John Ahearn
of the same kids makes a beautiful pairing. There is something almost Egyptian about the sculpture.
I'm glad I went to the Dorian Grey Gallery.