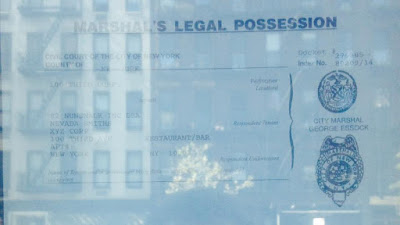 Several tipsters have told us that the Marshal has taken legal possession of Nevada Smiths at 100 Third Ave.

Here's the official word from Nevada Smiths via Facebook...


Due to Circumstances Beyond our Control Nevada Smiths is temporarily closed. We are working to resolve the Situation and...
Posted by Nevada Smiths on Tuesday, September 15, 2015

Of note: According to DNAinfo back in April, a New Jersey bank filed suit against Nevada Smiths after the bar failed to make the last four payments on a $150,000 loan.

The football/soccer mainstay opened in their new home between East 12th Street and East 13th Street in April 2013.

Here then, where Nevada Smiths once stood
Posted by Grieve at 10:19 AM

Let this be a warning to every other EV bar that opens its doors to SantaCon every year in the mistaken belief that hosting drunken Santas will somehow help their businesses.

Is Nevada Smith's just a tenant or do they own the building? Having abandoned apartments above them hosting neon beer company signs in lieu of rent-paying tenants was never a good sign. What the heck was happening there? No certificate of occupancy?

For once I'd like to see who this Marshal is. He/she seems like a badass who is not afraid to take matters into his/her own hands. The Marshal probably gets shit done. Bro.

Nevada Smith's is not a bad place. I go there when I'm not in the mood for Pour House, which is my favorite.

Re 12:18 -- Yes, the incompetent DOB, which is ruining the city, could use some of The Marshal's butt-kicking spirit!

What a hardship - there's nowhere else to drink nearby, as we all know!

I feel sorry for anyone who lives near Nevada Smith's b/c the noise level just walking past is deafening. I guess Nevada's loss is going to just make all the other places that much more crowded.

PS: I know I'm in the minority, but really who the hell wants to watch sports at that volume? It's literally painfully loud. And you'd think that for anyone who works there, the sound levels would constitute an OSHA violation.

They're like every other place that thinks blaring a TV or music creates atmosphere. Your customers create atmosphere.

I have no problem with people going to a sports bar although I would not be seen dead in one. My problem lies with unnecessary volume and closing hours shit show. Why do these places even install air conditioning when the entire facade is wide open? Close the front windows or close down the establishment. Bro's are people too, I guess.

Now if they only close 13th fucking step!!!

Years ago when I lived across the street from NS, my buddy and I wanted to grab a drink and I said you know, I've never gone into Nevada Smiths, might as well give it a try. When we got to the door the bouncer stopped us and said "Sorry, too many dudes" as if they were trying to run a club or something. Last time I ever tried going there. Whats the matter guys, not enough dudes to pay the bills?

Anyone else wonder how a massively popular bar can't make the last payments on a $150k loan? That's probably not far off their take for a few weekends, especially when the Champions League is on. Something else is going on, methinks.

Someone in that place must be snorting the profits if they can't pay their loan. The formula has been established in the EV of sports bars on every avenue to accommodate the influx from suburban America. They don't know or care about art, literature or music beyond NYC ambassador T Swift. Getting drunk, loud and dedicating their lives to watching millionaire athletes smash their heads together is like living in those awesome Roman empire times minus the culture, art and science.

Too many Loans! That's the Bottom Line!

NS was awesome back in the day. It's heart and soul was ripped out when management tried to screw over their staff. All the real fans ( not the tourists) left at that time. The new location was a neon travesty masquerading as NS...Glad it's finally done.

Several loans against the bar

Contractors who built the place stiffed for thousands, bar was never fully finished

Bar has no heating or proper kitchen as the plumber was stiffed for thousands, no gas in the bar for cooking or heating

Nevada Smiths includes all 3 floors and the basement! It was primarily a bar focused on showing soccer games. It typically got packed for high-profile matches.