Minus a floor (mostly), BSA to weigh in on Ben Shaoul's zoning variance today for 515 E. 5th St. 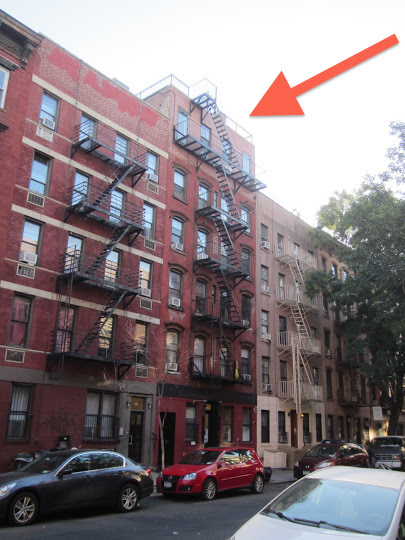 Workers packed up their gear and sidewalk bridge a few weeks ago at 515 E. Fifth St., where they had been removing the illegal top-floor addition courtesy of landlord Ben Shaoul.

And the top level here between Avenue A and Avenue B has been hollowed out, with a couple of walls remaining ... 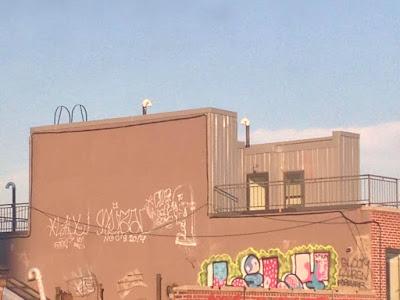 515 Penthouse Removal Watchers say this configuration is now similar to the Shaoul-owned 514-516 Sixth St., where the formerly illegal space is apparently making for a cool party gazebo for residents.

To quickly recap seven-plus years of illegal addition history: The Board of Standards and Appeals (BSA) ruled in 2008 that Shaoul needed to remove the 6th and 7th floors. However, his attorneys had requested that the city grant a zoning variance to "permit the constructed enlargement, minus the penthouse, to remain" here.

The BSA apparently gave Shaoul until the end of July to provide proof that the top floor had been taken down … then the BSA would reopen hearings on the variances that Shaoul and Co. are requesting.

According to a member of the 515 tenants association, the next hearing is today.

DNAinfo reported on Sept. 4 that four studio apartments on the sixth floor had been listed for rent even though the "floor does not have a certificate of occupancy and the building is technically noncompliant with local zoning regulations."

Shaoul told DNAinfo that he did not know how the listings came to appear on Streeteasy. (They are no longer on the site.)

“I’m not responsible,” he said before pinning the listings on brokers.

“Brokers are unauthorized. Brokers do that all the time. There’s nothing,” he said. “Brokers do whatever they want to do.”

A building source claims that one of the sixth-floor units has been occupied since late August.

CHOKING! Wow, how does BS walk with balls that big? Brokers do whatever they want to do??? Yeah Ben, you were just minding your own business and these rogue brokers climbed into your building, snapped pictures, wrote up a description and just started renting out your apartments. (It's a wonder his lips don't drop off his face!)

Meanwhile, Shaoul, Cromin, Mahfar and their ilk continue to lie, cheat and, yes, steal and our elected officials are "on it". Thanks guys!

He doesn't have any balls, all he has is stinking corruption dripping from the empty hole where humans have hearts.


So I guess brokers are determining the rent amounts on their own too? Is that what we're to believe?

Because, of course, the rent prices also appeared in those listings.