[Updated] Where you can (hopefully) view the super blood moon tonight 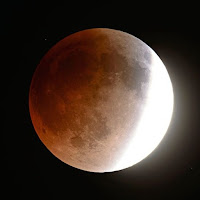 Let's just cut-and-paste this explanation from The New York Times:

A rare astronomical phenomenon Sunday night will produce a moon that will appear slightly bigger than usual and have a reddish hue, an event known as a super blood moon.

It’s a combination of curiosities that hasn’t happened since 1982... A so-called supermoon, which occurs when the moon is closest to earth in its orbit, will coincide with a lunar eclipse, leaving the moon in Earth’s shadow. Individually, the two phenomena are not uncommon, but they do not align often.


For these kinds of events, we usually look to local astronomy buff Felton Davis of Maryhouse, who sets up his telescope in strategic points in the neighborhood. However, he is out of town at the moment... in his absence, EV resident Danielle Baskin along with her friend Maya Eilam and Joanne Kennedy from the Maryhouse are operating the telescope. Felton has trained them how to set up the gear ... so if the weather cooperates, then East Village residents can still view the spectacle.

Danielle and company will be by the Second Avenue F station (Second Avenue and East Houston) from 7 p.m. onward. The eclipse should reach totality at around 10:45 p.m.

Keep in mind that this moon won't happen again until 2033, the same time when work is expected to be complete at the Astor Place Reconstruction Project

Image via the U.S. Naval Observatory 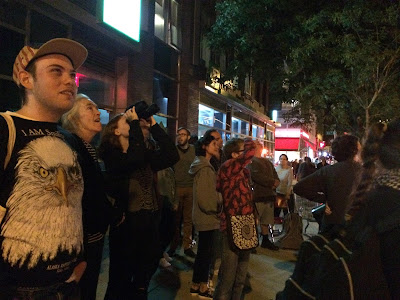 [Photo via Danielle Baskin]
Posted by Grieve at 5:26 PM

What on earth makes you think that Astor Place will be done by 2033?
I'm giving it until the end of the century.

Bill, skeptic of anything involving Havana on the Hudson a k a City Hall

Saw it from Houston @ A. Nice to see so many people out on the sidewalks to watch it. Met a lot of my neighbors as we joked about the seventh seal and whatnot.

Meanwhile a whole bunch of Mormons in Utah who thought this was the end of the world woke up this morning and were very disappointed to find out but they were still alive.

Hey Bill, the moon was red because it's communist!