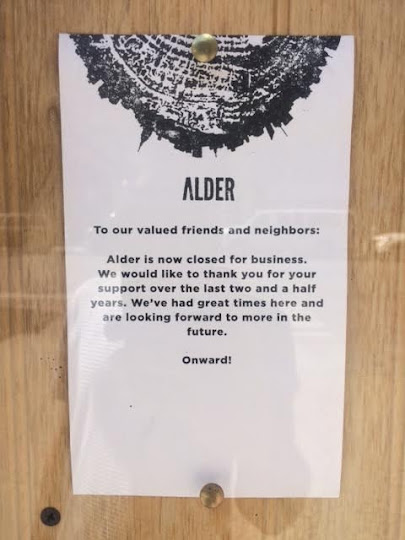 After two-and-a-half years in business, Chef Wylie Dufresne closed Alder, his well-regarded bistro at 157 Second Ave., at the end of August.

As far as we understand, Dufresne never provided a reason for the closure, which took some fine-food watchers by surprise. (Eater, who first reported the news on Aug. 3, theorized that "it sounds like a rent hike might have something to do with it.")

Now the space between East Ninth Street and East 10th Street is on the market. Here are details via the listing at Sinvin:

Description:
• Gorgeous, brand new, custom, million dollar renovation built for a Michelin chef
• Fully built and equipped restaurant
• Full 2 am liquor license to be transferred
• Vibrant late night neighborhood in the heart of the East Village on the best block of Second Avenue
• 56 seats plus 15 at the bar and outdoor seating for 16
• Formerly Alder

Commission is co-broke of 16% of the key money

Well, there will likely be plenty of commenters to take exception to the listing saying that this stretch here is "the best block of Second Avenue."

No. 157 was previously the address for several restaurants before Alder opened in the spring of 2013, including Plum … and Cafe Brama.

Its too bad this space and all the top shelf renovations are on bro way. Hardly a go-to destination for high end food when the surrounding bars' patrons are vomiting on everything.

Why have I never noticed this place? Oh yes it's on a strip on 2nd I always avoid.

In addition to the proximity to The13th Step, let's not forget the major gas explosion and building collapse that happened on the next block down, which turned the whole area into a nasty, congested, smoke filled constructiion zone for months. Cars sat in traffic honking and trying to squeeze through that area with all the lane closures, not exactly the kind of place you want to go to enjoy a fine dining restaurant. Even Moishe's suffered, everyone's business was down.

The city should change that part of Second Ave to Bro Avenue. I envision another bar, full of bros of course, who command your attention, who are even more at the helm of that corner.

Lower 2nd Avenue is long overdue for renovation. The only thing holding up one building is the building next to it.

According to some friends with financial interests in restaurants on 2nd, business is down 10 to 20%. They still make money but the trend is a little scary. They think the frat crowd is driving customers away. Good luck getting a high end restaurant.

I believe it. The frat crowd is driving away a variety of people. Walking around on a weekend night the crowds are Mardi Gras and Disney Land combined in size and everyone is drunk and screaming. Add to THAT the college kids out for the night milling around and it's thousands of people in the streets. It's fucking awful and bad for any business not a bar or atm.

No high end in that area.

I will be sad to have Adler go... It was then one grownup bar in a douche filled street... I remember that they were one of the first no santa bars during santacon...

Best block for what?

I live 2 blocks from there, like to eat at good restaurants and never really noticed it either. As for business being down overall, whenever I want an enjoyable meal out I pick one far away from the center of the EV which is now insufferably full of tourists and bros and IBM douches in actual business suits. Otherwise I'd be eating there a lot like I used to but no way will I pay to sit among the type of people I deliberately left, and have paid extra over the decades to stay away from.

@11:57am: I can believe business is down, because this nabe is now a ghetto. A bro ghetto.

16% of the key money commission? If that is on top of the initial key money thats absurd. Its another $64k. I thought commercial fees were paid by the building owner, a scaled % annually over the lease term? Its all FUBAR now.

"They think the frat crowd is driving customers away". There is no way anyone over the age of 35 wants to spend any time even passing through the gauntlet of sports and bro bars on lower 2nd avenue. More grown up places will close and move out meaning more spaces for sports and bro bars to fill. At what point does the city address this hell strip they and the assholes in Albany giving out liquor license to anyone which ask have created?

@5:42pm: "At what point does the city address this hell strip they and the assholes in Albany giving out liquor license to anyone which ask have created?"

Not nearly soon enough, unfortunately. It's like they moved the "old" Bowery one block east, with upscale drunks instead of the old flophouse residents.

Why not have the mayor rename the hood to broville?

@ 5:42pm "At what point does the city address this hell strip they and the assholes in Albany giving out liquor license to anyone which ask have created?" Look, DeBlasio has got his hands full what with creating a task force to take down the Times Square Street performers that clearly threaten this city's place on the nation's morality scale. Priorities, you know.