Troubled teen film of the weekend: 'River's Edge' at the Anthology Film Archives 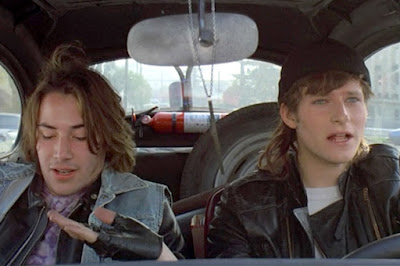 Just pointing out a screening tomorrow that's part of the "This Is Celluloid: 35MM Encore" series at the Anthology Film Archives.

When sullen high-schooler John kills his classmate Jamie, far from keeping it a secret he brags about the crime to his friends (played by Keanu Reeves, Ione Skye, and Crispin Glover, among others) and takes them to see the body. Rather than report the crime or struggle with guilt at their association with the killer, they react with morbid curiosity or misplaced loyalty. Without denying its characters a measure of sympathy or understanding, "River's Edge" is a deeply unsettling depiction of teenage alienation and moral paralysis.

The movie, which also stars Dennis Hopper before he got really hammy in the 1990s, was called "the darkest teen film of all time" earlier this year by Salon.

The "River's Edge" screening is at 6:45 p.m. tomorrow (Sunday). The Anthology Film Archives is on Second Avenue at East Second Street.
Posted by Grieve at 12:00 PM

Great film. Has only become more relevant with time.

That trailer sure sucks though.
Someone should do a remake of this film in the age of Facebook, social media, et al.

Please no 7:02pm. It's bad enough most of us had to suffer the lousy acting in the original film by Keanu "I Sound Like Jeff Spicoli And Can't Act For Shit" Reeves and Crispin "I Sound Like I Have Hemmorhoids Or Am Taking A Giant Shit" Glover.

Crispin was good in Back To The Future, Reeves good in Speed and that's about it for those two.

Little off subject but if they ever remake "Fast Times" I will totally snap.