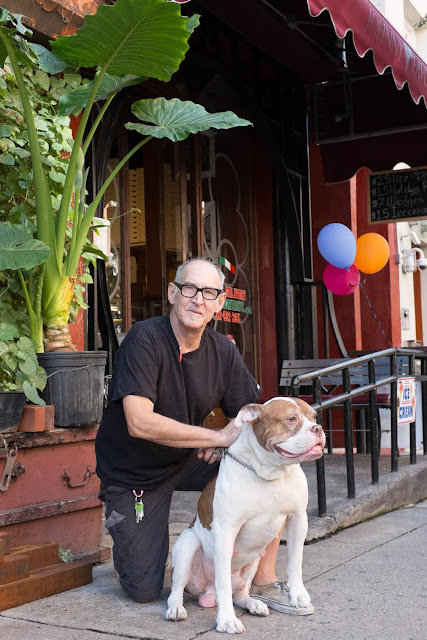 
Name: Matthew (with Vincenzo)
Occupation: Welding, Plumbing, Electrical
Location: 4th Street between A and B
Time: 2 p.m. on Sept. 18

It was alright. It was very family oriented and everything was about the block. The neighborhood was all these different zones. There was Chinatown, which was right below Canal, and right north of Canal became Italian and it went from the East Side all the way to the West Side, up 5th Avenue. It was all factories, tenements, warehouses. Then in the Irish neighborhood that was uptown, there was a small pocket of Italians. We used to go to this one place, Esposito's, to get pork and sausage with my grandfather. It was all gangs. Spanish gangs, Italian gangs, Irish gangs.

My family is Sicilian. I always worked for my uncles and my father. My father had eight brothers and one sister. My mother had eight sisters and two brothers. I grew up doing electrical, plumbing and welding. I got my first job working for two German guys up in Yorkville. I was a child and worked in a furniture factory for 40 cents an hour. I used to go in and make hydrogen glues. I used to make glues in the morning. Let me tell you something, 40 cents an hour when I was 5, 6, 7 8… the coolest sneakers were $4.75. I was doing good.

I was born right after the war. The construction business was booming. They had to build for all these new families. The guys coming back from the war — everybody’s wife was pregnant. There were jobs and there was money in the 1950s. People wanted homes. So I started building all these developments out in Long Island — South Shore, North Shore. My father and his brothers built Levittown. It was a big development. There was no shortage of work.

I moved here because I like being anonymous. After I left the Lower West Side, I moved to Chambers Street. It was beautiful — it was like a big void. Nobody was ever around; nobody lived down there. I mean, there were a few people. Then, all of a sudden, it started getting SoHo-y and I said let me get the fuck out of there, and I came here. I betcha I came here about 1970, something like that.

I’ve lived on this block half the time I’ve been down here. I’ve had some outrageous places. I had this huge fucking place for $210 on 9th Street, where I had two rear apartments converted into one. That was between B and C. I also did artwork and I was painting in there. And I had another place on 9th Street. Wait till you hear this, you’re gonna die. It had three working fireplaces, five rooms, a huge backyard, and I paid $65 a month. Then I had a place right over here, top two windows over there, all the way down. I’ve had beautiful places.

Families may have been poor, they may not have had much, but these kids behaved and they were taught manners. If they saw someone from the neighborhood, some old woman carrying something, these kids would run and help her and not for anything. Their parents taught them. And then again their parents were in and out of jail. I’m happy to say I was able to influence some of them. There were a couple of kids who I turned into plumbers, who ended up getting their licenses. There were a couple kids who I turned into welders.

Where George’s bike shop was [on the block], back then there was a sandwich shop. The cold cuts in the display case were green-blue. Didn’t have a slice of bread in the place. They had milkshakes and all that crap. It was called The Sandwich Shop – did not sell one fucking sandwich ever. It was a coke spot. Down the block was brown bag; down the block from that was silver bag; over here was yellow bag.

You would think that, you take a guy like George, George’s landlord raised his rent two-and-a-half times what its worth. Now he’s got a psychic in there. Every single psychic place I have seen open has been open for 3 months and then from there on out the landlord is trying to get them out for back rent. They know how to work this game. Every single one, and for what? I’ve known George since I’ve lived on the Lower East Side, for 45, 50 years.

I want to tell you something funny: I hated my uncles and my fathers for making me go to work all the time. I wanted to hang out with my buddies, and now I thank God because of what I have learned from them. People don’t even know how to do [this work] anymore. In this area right here and the Lower West Side, all below 14th Street, I’ve converted hundreds, no more than 150 but no less than 100 boilers from coal, to oil, to gas. Some of my uncles were plumbers; some of my uncles were electricians, and I started at a very young age. I started at age where it wasn’t so sophisticated. You wanted your lights to come on at a certain time at night and you jerry-rigged an alarm clock to trip a switch. I remember watching my uncle Jimmy do it for my grandma, having the lights come on outside using an alarm clock. And my uncle Jimmy was a plumber, not an electrician. He got the idea from when we were converting boilers from coal to oil — there were timers on them.

Now what I do is I do electrical, plumbing, and welding. I’ve done work in a lot of buildings. I do emergency work for restaurants. I do any type of emergency job. No job is too small and no job is too big. I do plumbing, anywhere from boiler work, to fixing the drain under a sink, to snaking out clogged pipes, I do electrical, anything from putting in a new service, and I do welding, gates and fences. Come springtime I put all kinds of air conditioners in for people. Come fall I take them out. I put a solar panel in this building on 5th Street.

Listen, I mean it — I don’t care, whatever anyone needs done I can do. I’ve been around all this kind of work for so many years. Now there are all these specialists. You’ve got the air conditioner guy and the guy that does this and this. There were no specialists. A guy did work, people worked, they did that kind of work, from hanging doors to pouring cement. I’m 67 years old. Call me. I have no advertising, no cards. I could use some more work.

I have Matthew's phone number if you want to contact him about any of the work that he mentioned.

This guy's awesome. He reminds me a bit of my family from East Boston. Solid, hard working people. Remember them?

Yeah this dude, I see him all the time, a great neighborhood character. Love seeing him walkin n talking to his dog. Classic cat.

Regarding Matthew's comment regarding few people saying good morning: I've lived in the East Village for over 51 years. As a child, I remember the gangs and muggings and streets that you dared not walk down after dark. As a teenager and young adult, I said good morning and good afternoon or hello to many people on the street...I have a long time thing about being neighborly and polite. I can tell you that, in the past, rarely would anyone reply. It has only been in the last decade, that my good mornings and good evenings are returned, with reliability and a smile. In fact, it is the older folks...the ones my age, that rarely return a smile or a hello or good morning even today, as if their behavior is stuck in the 70's. The East Village of the 60's and 70's were times of survival and street savvy. It was tough times in those midcentury decades around here and, on balance, IMHO, the streets and the East Villagers who walk them are safer and friendlier today, than way back then.

I'd love to hear more of his memories.

i lived on the block matthew now calls home for 18 years. he was/is a constant friendly - but endearingly gruff - presence. his dog is a rescue, matthew saving him from a neglected life on a chain in a backyard (and worse). he is more than an east village fixture, or character, but a one of those rare individuals who hasn't been displaced or dismissed by the insane amount of college-minded kids, baby bankers and general douchebags who now inhabit/ruin the e.v.

This was by far one of the best interviews on here. What a cool guy.

YAY! Matthew is always a ray of fun sunshine!!! AND he always says hi to me-and-my pup!

I wanna hug that dog so badly

i could read a whole book of this guy's life stories.

Actually, I'll agree to a point about not being able to greet most people on the street—because they're transients and don't know who the hell you are—but one of the perks of staying put for so long is that I often find myself nodding to strangers on the street because although I may not know their names, I've been seeing them around for years.

This is one of the best things about this "Out and About" feature; it tells you about people in the neighborhood you'd genuinely like to know. They're still out there; I agree I could definitely read a whole book of this guy's life stories!

I really enjoy this guy. I've seen him almost every day for years since I moved back to NYC. I do say hello to him, and he's really a sweet guy beneath the gruffness. ONE THING, however-- His very large pitbull is un-neutered..and offleash at times. This is a VERY bad idea (and I say that as a veterinary professional)

I love this guy! I've seen (and said hello) to him almost every day for the past five years or so. Glad to know what he does. My AC needs some work.

Vincenzo is an American Bulldog, think Sandlot of the East Village!

I would like to talk to Matthew. I have a chandelier that is not working and I suspect it is the electrical wiring. Can you email me his phone number?

Hey Tater — I don't have your email address... can you email me then? grieve98@gmail.com