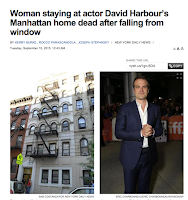 A woman leaped to her death early yesterday evening from the East Third Street apartment of actor David Harbour, according to multiple published reports.

The Post reports that Harbour met the woman at a treatment center. Harbour was in Canada when the woman jumped from his third-floor window into the backyard of the six-story building between First Avenue and Second Avenue.

Authorities have not yet released the woman's name. She was 29.

“She was someone who struggled,” said Harbour, who was in Toronto for the premiere of his film "Black Mass."

“She was in the shelter system. I was trying to help her out,” he said.

Police told the News that the woman had a history of mental health issues.

Harbour received a Tony Award nomination in 2005 for his role in "Who's Afraid of Virginia Woolf?" He appears on the HBO series "The Newsroom" and has had supporting roles in films such as "Quantum of Solace" and "Revolutionary Road."

"I'm very confused, I don't understand how this happened," Harbour told the News. "It's a terrible tragedy. I'm very shaken by this."
Posted by Grieve at 12:24 PM

To anyone who has been close to a suicide… Please always remember that there is absolutely nothing you could have done. I used to always think that all I had to do was come up with the right thing to tell my ex and he'd snap out of it. He didn't kill himself but there was always that worry.

Think about this logic: if someone is so completely out of it that they actually kill themselves then how on earth can a lay person ever even get close to saying or doing anything that would change that?

We're not talking "they took up playing the bagpipes" and we're trying to talk them out of it or something - this is the strongest drive that we have – the will to survive. If someone's brain is telling them to go against that there truly is nothing that anyone else can do.

If you're in the situation I was (living with a clinically depressed person will never get any real help) I recommend this:
Watch a ton of episodes of Intervention (it's on Netflix and will teach you how addiction is a family disease). Learn how to stop being an enabler and let them reach their own rock bottom. Depression is not a lonely disease. It requires a host to help the sufferer survive.

I was my ex-husband's rock and provided him with a social life, money to live on, etc. As soon as I dumped him he started to get help. He's a lot better now.

He so wanted me to be the one with the problem. He broke down one night and said "if I can convince myself that you're the problem then everything will be better because I don't think I can get well". Not with me enabling you you can't!

My last word on this:
It was easy to recognize that he had a chemical imbalance (holes punched in walks, walking 5 miles down a highway instead of getting in the car to drive home with me, he jumped out of a moving car when I told him he had to tell me the truth if we were going to stay married!). But after six years I finally said to myself: now who's the one with the problem? Why on earth was I staying with someone who was making both our lives miserable? I realized I was trying to prove myself to him. Trying to prove that I wasn't the sick one. Ha! Took me 4 years to leave because he kept making attempts at getting better.

To you, the first commenter: thank you for this comment. I think it changed my life.