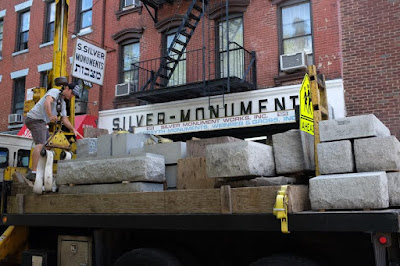 Workers yesterday began packing up Silver Monuments Works on Stanton Street and Essex Street for a move to Woodside, Queens, as these photos by EVG contributor Derek Berg show... 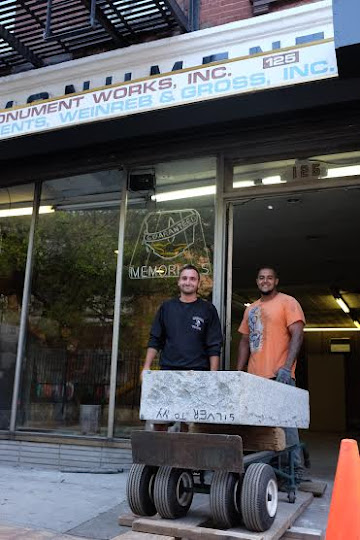 Silver Monuments, nearly 70s years old, was the last tombstone business on the Lower East Side... in the city's former monument district... 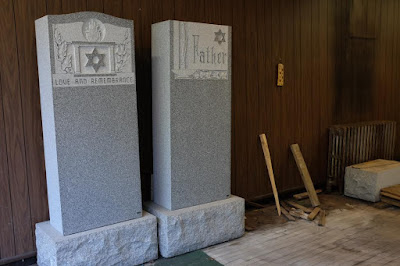 Here's more on the business via the Times in 2006:

Situated in a five-story walk-up, the store is owned and run by Murray R. Silver, 65, who lives in an apartment above the business, which absorbed three other gravestone dealers, Forsyth, Weinreb & Gross.

Inside, the selection ranging from standard marble “toaster” shapes with the Star of David in relief (customary for men, while women usually get Shabbat candles) to massive granite Torahs rests on squares of tattered artificial green grass to capture the feel of a real cemetery. The oldest gravestone sample, hand carved by Mr. Silver’s late father, Samuel Silver, depicts a broken tree and a flying dove.

“You are now in the house of satisfied customers,” a sign proclaims. Mr. Silver inherited the business from his parents. His father died 20 years ago and now rests in a cemetery on Long Island under a modest family marker engraved “Silver.” His mother, Minnie, who is 95, became the first woman on the Lower East Side to run a monument store’s showroom. She would leave work early so she could put out milk and cake for her children arriving home from school. 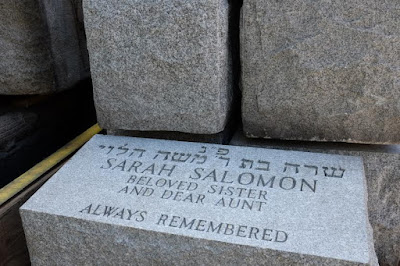 According to BoweryBoogie, who first noted Silver's upcoming move, Mr. Silver prefers to "rent the storefront to a 'quiet' business, not a restaurant; perhaps a gallery” after the departure.
Posted by Grieve at 4:30 AM

You have great website evgrieve. Thanks for informative update. This is very much like a VanishingNY type story. The physical vestiges of the old jewish lower east side are disappearing. It is fortunate that this business owns the building, a valuable asset that appreciated greatly over the years and has choices.

With all the young kids moving in, I guess there is no need for a monumental business in the area?

Shame to see this happening. When I first went to NYHC Tattoos I thought it was really pretty cool that it was right near a tombstone place. Well - now that this is moving, the guy who ran the pizzeria next door which had some of the best slices in the city opened his own place in the Bronx and NYHC Tattoos was bought by a bunch of hipster wankers I have NO reason to ever set foot on this block. This city is becoming pointless and a parady of what it once was...

Contemporary monuments to greed and stupidity are more inclined to steel and glass.

Even death isn't safe in the real estate business.

I'm amazed that this place lasted as long as it did. I mean, they weren't even serving $18 cocktails! Did they even try?!?

It makes sense to move the business closer to the graveyards. How many people even get buried these days, compared to being cremated?

We will welcome them to Woodside! Where exactly will they be moving to?

11:47am NYHC Tattoos was bought by "hipster wankers"? Really? I thought it was owned by Vinny Stigma from Agnostic Front and Jimmy Gestapo from Murphy's Law who are far from hipster wankers. Try guys who are from NYC born and raised and have been on the LES before you were born or when you were an infant. You might want to look them up. I seriously doubt Vinny and Jimmy would sell NYHC Tattoos to hipsters.

Nick Caruso and Mike Maney own it now.

Anon 7:45 - well you can see by the 2 comments following what I said was historically accurate. I have all the respect for both Vinny and Jimmmy in regards to their tatoo parlor but it's not theirs as it was sold. They are true NYHC both.

As to the wankers that bought it and shame the name of NYHC (one of whom banged into me as I was getting tattoed) - piss off!