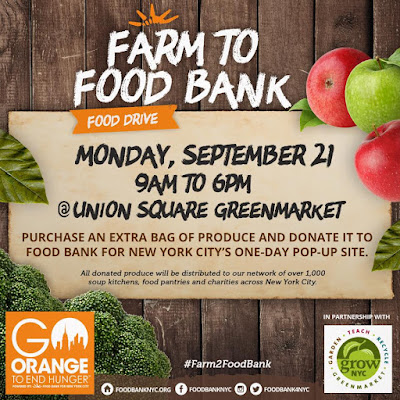 Food Bank is asking New Yorkers who stop by Union Square Greenmarket to shop for their families, to buy a little extra and donate some fresh fruit and vegetables to Food Bank to help ensure that all New Yorkers have access to healthy nutritious meals.

Great idea but sadly too many people go to food banks as its free. If you question any part of it you are a horrible racist person. I saw this firsthand when I wad homeless. People with section 8 housing and food stamps milking the food banks and selling the stamps or using them for soda and junk. This idea that people are literally hungry is absurd. There are 170 soup kitchen/food banks in Manhattan. People go to 2 per week to avoid buying groceries they can afford. Funny how these housed system milking scammers get more sympathy than actual street homeless who of course cant cook and have no resources. Amazing how uninformed and disconnected from reality some people are. Better off buying pasta and sauce and dropping it at the mission. Feed the homeless.

Not so "amazing", A. Other than someone like yourself, who's reporting this kind of abuse? I worked in the courts district downtown. I used cross the parking lot/park opposite 100 Centre Street in the evenings, when the food wagon distributed food. I thought the line was suspiciously long and light on "homeless" people. One night, as I passed, my suspicions were confirmed, when a single homeless man, near the end of a line at least 60 deep, finally "had it", and gave the crowd "a piece of his mind". His accusations echoed yours above. He said he was "homeless", and a "Vietnam Vet" who fought for his country. He accused the people on line of being parasites "cashing in" on support meant for people who really needed it. There were very few people answering his charge. He sounded like an intelligent, articulate man, who knew very well what he was talking about. The vast majority of people on the line were Asian, mostly Chinatown residents I guessed. Searching for legitimate reasons they might be there, I guessed that at least some were illegal emigrants exploited by their own and left without Social Security or any of the other supports documented Americans might take for granted, but I had no way of confirming that. It was also tempting to suppose that many of them were simply unprincipled leeches who heard "free food" was being given away and decided to get some for themselves. I suppose a few of them may have actually been doing a good deed for some elderly person who was broke and disabled in their building. Other than myself, no one else seemed to pay attention to the "street theatre" of the indignant soul who took them all on...probably assuming it was simply another mentally disturbed "homeless" person "going off", a sight and sound not uncommon downtown. What did I do? Like most other people on the street that night, I had worked all day and was headed home. While walking away guiltily, I worked through how "doing something about the injustice" would play out and couldn't imagine who would welcome my complaint. The official operating assumption seems to be "If they show up, they must need the food, and we're not going to question their need!" Sounds great...but I agree with you, A, it has become a matter of "double-dipping" for too many people already on public assistance, and/or food stamps. It's not only a diversion of funds, but a practice which causes the suppliers to supply foods better suited to people in regular or public housing, not homeless people.

if you are willing to stand on a food line for an hour you probably need that help. and while it is dishonest to get free items you are not really eligible for, why is this worse than the people that run charities for the poor that steal thousands of dollars (and more) from the agencies they run? or the elected official that misuses government funds meant for the poor, etc. etc. etc.
i would rather a person that might not meet the stringent "poor" guidelines get free food than they go hungry, especially while the bureaucrats that run these programs steal from us all with no effort or regret (unless they are caught).
we live in a world where crime pays and you are punished for honesty.

People who are collecting food stamps aren't exactly rolling in money and anyone who gets on a food line to save money puts up with instantly being judged. I once listened to someone question an acquaintance of theirs because they just got $100. The guy obviously has other bills, as we all do! Give it a rest people! I have gone many times on bare minimum rather than deal with church pantry biddies, and that is wrong! Yet there you go judging people whose lives you do not know. Good for the Vietnam Vet for speaking up, though. Some are way worse off than others and of course, this needs to be addressed.