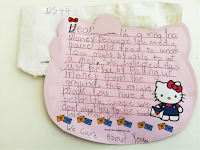 Here's a story about Maribella, who attends second grade in the East Village, via the Coalition for the Homeless:

Every day she and her mother, Michelle, walk through Tompkins Square Park, where they see more and more homeless men and women suffering on the streets. Maribella decided she couldn’t just walk past them again and do nothing. So she figured out something even a second-grader could do to help.

About a year ago, Maribella began collecting loose change she found on the sidewalk and under couch cushions, keeping the spare pennies, nickels and dimes in a special jar on her bedside table. She carefully kept track of what she collected in a journal. Now, a year later, her jar holds $25 dollars in change! She decided she wanted to give the money to one of the homeless people she sees everyday – along with a note of well wishes

And if you happen to be out in Ridgewood, Queens, tomorrow, Maribella and her mother are hosting a lemonade stand and stoop sale, with all the money going to the Coalition for the Homeless.

What a little sweetheart. If all of us could only follow in her footsteps. She is an inspiration. :)

This is awesome. What a sweet kid.

To all the parents who are worried about their children seeing homeless people in the park: this is a positive way to teach your kids about homelessness. Maybe when they grow up they will do a better job of solving this problem than we have.

I am not a Christian but this made me think of a bible quote.. and a child shall lead them. The whole neighborhood could learn something from this amazing little girl.

What a much-needed and inspiring story. Bravo mom, for putting the time in and creating a meaningful teaching moment with your kid and making a positive difference at the same time. I see good things for this child's future. It's not easy teaching real empathy/compassion for others these days: Just look around...we're drowning in narcissism and contempt.

I have noticed this too - children are much more sensitive to the unfairness and scariness of homelessness - asking many questions about it. They have not yet had to make the moral compromises necessary to live in the world - and this make them clear eyed.

Great Idea. Too the money was prob spent on alcohol or heroin. If you really want to help someone give out underwear and socks and hotel size hygiene products. A fundraiser for the Coalition is a great idea. The Coalition for the Homeless does great work. They provide a mailing address, assist clients with food stamps, Medicaid, and shelter placement. Once you get food stamps one can acquire a lifeline phone or 'Ohamaphone' as they arw called. They provide referrals for clothing and haircuts as well. Its a great organization that advocates for improved shelters. Support them if you can.

That little girl is a darling for being so thoughtful and proactive. If only adults could exercise compassion with a simple solution, can you just imagine how many lives we could change?

There are no simple solutions. Thats the issue.

"You might be able to get a mell."
Right in the feels.