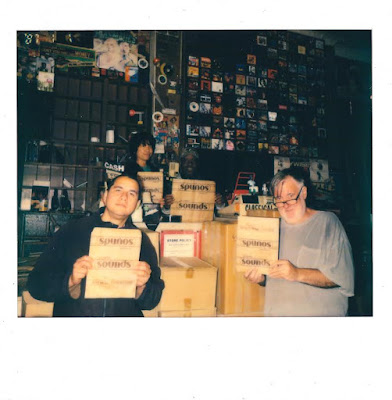 Photographer Nick McManus is a group portrait artist who works on Impossible Project Polaroids for gallery exhibition here in New York City. This past weekend, he scheduled and shot group portraits of workers at Sounds on St. Mark's Place and Rainbow Music on First Avenue, which closed for good on Sunday. (The Sounds closing date is up in the air still.)

In addition, he visited the original location for Bicycle Habitat on Lafayette, which is closing today. (The shop is consolidating spaces after a large rent increase.) 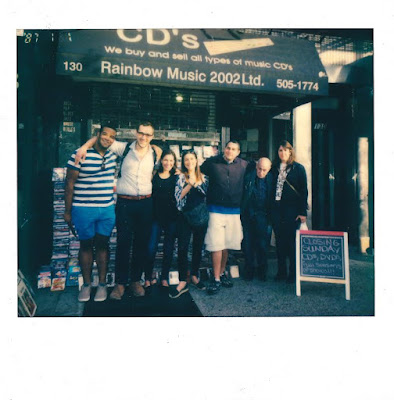 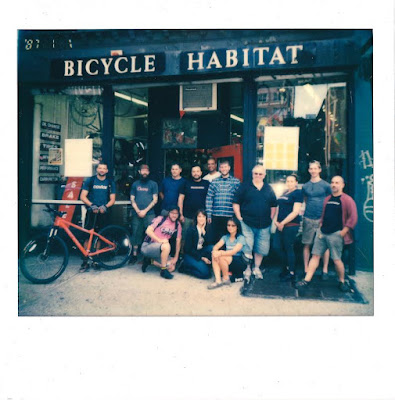 "I felt it was important to give back to them after so many years of personally enjoying their music and bike services," said McManus, who has been regularly taking these group portraits at business closings.

In each case, he presents the owners with a copy of the portraits — "a physical souvenir of a place they'll miss dearly meant a lot to them."

I asked McManus what the mood was like as these owners were closing up their shops.

At Rainbow Music, owner Bill "Birdman" Kasper "was ready for this to happen. He will be selling CDs on the street in Greenpoint in the near future. The mood was something that could be described in the words of George Harrison, 'All Things Must Pass.'

Over at Bicycle Habitat, the co-owner Charlie McCorkell looked like he would miss his little desk in the back center of a store he's worked out of since 1978. Though they've expanded to four other locations, one of which is on the same block and will consolidate with the other one, the original high-ceilinged wood and iron interior of their original location will be missed as something he spent most of his adult life in and no place would ever equal it. At the moment of the portrait though, the mood was less somber and more work busy as he posed with a staff that knew they had a lot of moving and and clearing ahead of them so that the store would be completely out by [today] when Charlie had to turn over the keys."

You can find more of McManus's work via Instagram.
Posted by Grieve at 4:30 AM

Hey Snowflake. See all the people in those pictures? Those are real people. These are the kind of people that used to sell you your music, or books, or videos, or bike parts. But these days all the Button Clickers prefer to click buttons or swipe left or swipe right on their phones while they're sitting on the can swiping their ass. That's called multitasking. Or progress. Or laziness. Or antisocial behavior. Take your pick. Because the Button Clickers don't want to have to deal with real people. Especially if the person behind the counter doesn't treat them with respect like the Special Person they think they are. You see, when you order all your stuff onine by clicking a button, there's no risk of having an actual human interaction that confirms you're just like everyone else, and not the unique all-powerful presence in the universe who, like Superman, was sent here to Planet Earth to show the rest of us The Way.

Button Clickers think they should get everything cheap or free, and it should be brought to them immediately all wrapped up a little package wiith their name on it. Well isn't that special? Like Special Snowflakes, all wrapped up, just like them. And now the ice pack has melted, and all the stores are gone, along with the real people behind the counter that you dreaded and abhorred. But don't worry my little Snowflake, there are plenty more buttons to click on in your virtual world, and your Special Snowflake package will be here any day now, unless it gets swiped by some button clicking Taylor Swift fan in your unattended lobby first.

while these folks are not going out of business these closings are part of the neighborhood losing its humanity - piece by piece, person by person, store by store - almost overnight.

@Blueglass Of the three businesses only Bicycle Habitat is not closing permanently, but they are losing their original space which will probably cost them a lot of business since this leaves them with only half of their retail space. Both Sounds and Rainbow Music are closing permanently. with the owner of Rainbow resorting to selling CDs on the street. As far as the music stores go that's called going out of business if you ask me. Any way you slice it this sucks.

I also see on Bowery Boogie that 16 Handles on Lafayette shut down after barely 3 years, and they used to be the hot Fro Yo chain, so it makes you wonder about the one on 2nd Avenue and how long before it goes away too.

All discussed waaaaayback in 1982 in a collection of articles called Pushbutton Fantasies investigating one of the net's precursors, videotext.

The computer/buttons/clicks gives the user a false sense of security and control in a world lacking in both. These closings are part of what was called unintended consequences of shifting consumer technological practices. AS IF NO ONE was "in control" of hard/software design, just simple evolution.
BULLSHIT!!!
It was designed with an intentional built-in rubric of "convenience", while it's REALLY about collecting data for eventual sale, with government demanded back doors for their own purposes.
FIGHT THE POWER!

(Right....as if this pertains when most of the folks reading this are doing so on their own hand-held "control" devices.....your location, activity, conversations, etc ALL truly OUT of YOUR control.....happy motoring!)

Hey Giovanni - Is it possible to be against the neighborhood turning into a soulless dust bin for yuppies AND not be an ageist, technolgical luddite? Give it a try...

Giovanni, a much short explanation is "commodity fetishism". Don't get hung up on the form.

I just ordered three pairs of pants from Amazon for less than the price of two pairs at OMG on Broadway. If you can afford higher prices, good for you, but it's not not a virtue.