Raccoon sighting on Avenue A 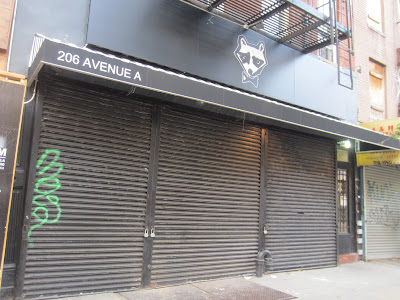 The new marquee went up last week at 206 Avenue A, where a bar-cocktail lounge is opening in the former Common Ground space between East 12th Street and East 13th Street.

We haven't heard too much about the new establishment just yet. Last November, the proprietors of The Garret — a rather hidden cocktail lounge above a Five Guys on Bleecker Street — went before the CB3/SLA committee for a new liquor license for the address.

However, CB3 denied the application, citing concern from neighbors and the applicant's inexperience operating a business, among other reasons, according to the minutes (PDF!) of that month's meeting.

Apparently the owners were able to secure a license directly from the State Liquor Authority.

The Garret's menu on Bleecker Street includes a slate of draft beers (priced $7 to $9) and house cocktails with names like A What What and Missus Wheeler ($14-18). As for the raccoon in a bow tie on the sign, the Garret has a character named Rocco on its website.

Common Ground closed at the end of April after 10 years in the location.
Posted by Grieve at 4:14 AM

Man these fucking bar keep coming and as soon as one dies another takes it place. I have great pity for anyone that has to live about one of these place and even (bar less) side streets get the pleasure of their drunk clients pissing and yelling on weekend nights. Fuck the Albany for making our lives hell.

You'd think people might get over the fact that there's bars in the East Village already. No shit.

Well at least we know that "The Garret" are not good neighbors and as such, they go on my "banned" list.

Oh my God I hope this isn't an offshoot of Raccoon Lodge; that was a hideous frat bro bar on the Upper West Side, I think, in the late 80s/early 90s that was newsworthy for the bad behavior of its clients even back then.

I don't understand why SLA just rubber-stamps everything? There's no fucking respect. It's our neighborhood. CB3 needs to be listened to, they don't do this for nothing.