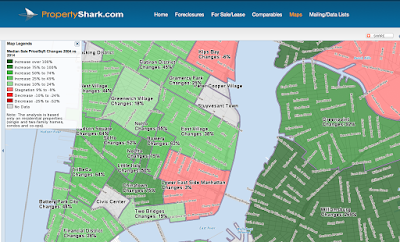 Just checking out an interactive map via PropertyShark, which shows how home prices in NYC neighborhoods have changed in the past decade.

NYC real estate "news" such as this goes straight to the who-gives-a-fuck bin as far as I'm concerned. It's all just mind-numbing depressing common sense-defying craziness. Yeah, let's talk some more about 350 square foot kitchenette studios selling for half a million bucks. OK.

I just dont get how this continues?

Anonymous 12:23, It's like this: those at the top of the wealth/income distribution continue to rake in obscene amounts of cash. There is nowhere to invest it productively, so they buy things like art and real estate. As long as this goes unchecked, there is no end.

What would be more interesting to see is the rate of increase seen with a corresponding map graphic showing population density. Large stretches of vacant buildings bringing in higher property values is what's so distressing. NYC real estate is simply a place to dump investment cash

That actually sounds very low. I would think it increased far more, even in the last 3 years.