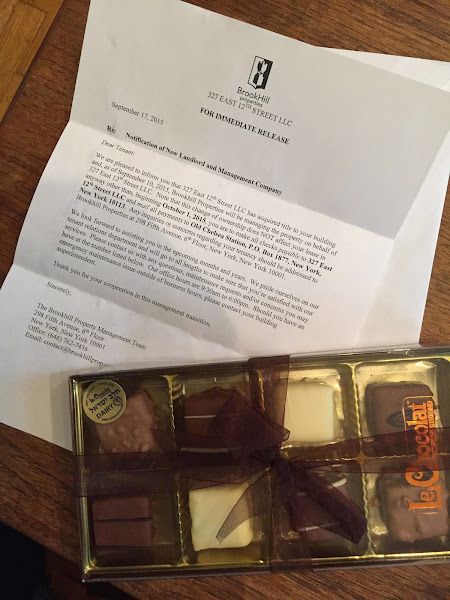 An EVG reader who lives at one of the properties, 327 E. E. 12th St., passed along the welcome package that the Brookhill Property management team left yesterday for residents — a small box of chocolates… which accompanied a fairly innocuous letter about the change in ownership.

The letter points out that "We pride ourselves on our tenant relations department and will go to all lengths to make sure that you are satisfied with our services."

Beleaguered rent-regulated tenants at the Toledano-owned 444 E. 13th St. received wine and fruit baskets back in May after the continued lack of basic building services. Earlier in May, residents at No. 444 filed a lawsuit against Toledano and the management company, Goldmark Property Management, for "deplorable conditions" as well as for alleged ongoing threats and harassment. (Toledano later reportedly fired Goldmark Property Management after news of the lawsuit broke.)

In August, state officials served subpoenas on Goldmark Property Managmenet, investigating whether the company threatened tenants with police raids, prostitution stings, evictions and the shut off of essential service, according to The Real Deal.

According to an article on 444. E. 13th St. that City Limits published last Thursday, there were 244 open violations of the city's housing maintenance code for hazards such as cracks in the walls and ceilings and infestations of cockroaches, mice, and bedbugs at one point in June. Since then, City Limits reports that the number of open violations at the East 13th Street building has been reduced to 84.

And yet, despite all the violations, the allegations of thuggery, the building conditions, the threats of violence and the harassment, this tool STILL finds a bank willing to lend him hundreds of millions of dollars to continue his depredations against his tenants.

"want some candy little girl?" The oldest trick in the book, creepy and sadly funny at the same time.

Sad to say, but many banks look at these deals as, well, money in the bank.

I work at a local bank that lends to these types of creeps (although I have, and will have, nothing to do with that part of the business). I can't tell you how many times I've heard loan officers pitching these deals to the credit officers. "It's a goldmine! He's got regulated tenants in there now, but he's gonna get them out, and then the sky's the limit!"

Any psychologist will tell you that this is a classic case of what's known as "reciprocity" where you load one party up with a debt so you feel (often unconsciously) the need to repay the debt. It's such a powerful force of nature that it's often used to manipulate people in very easy ways. The Red Cross does this with return envelope stamps they send you. The donation rates skyrocket.

Don't fall for it.

Atomic Man - appreciate the info. What a world...

We all received our chocolates today, lovely gesture...
Thank you EV Grieve for your reporting.
Knowledge is power.