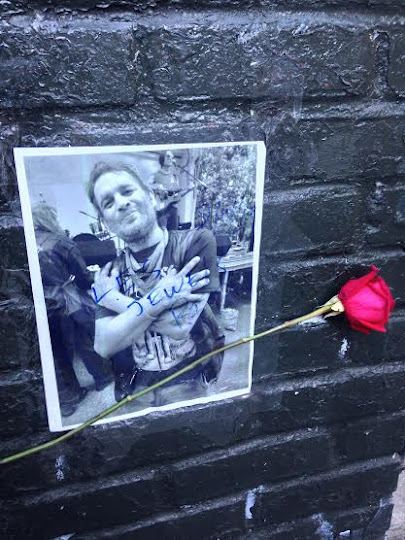 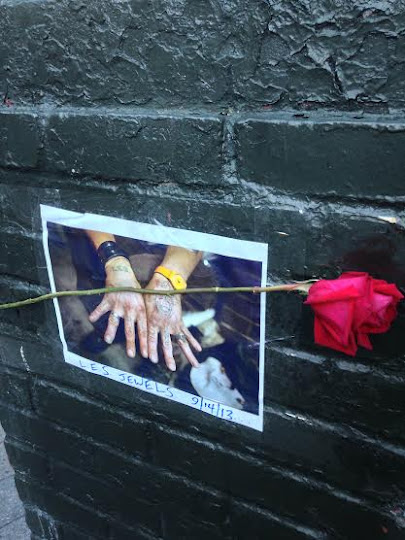 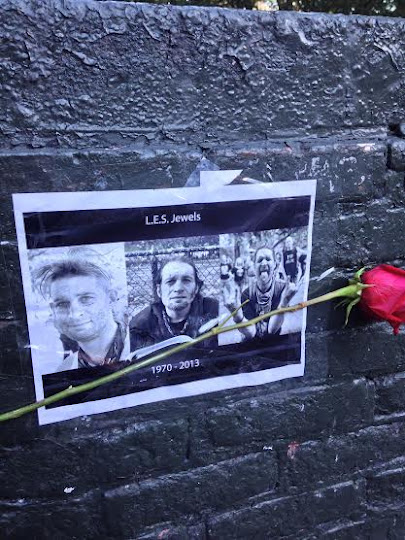 On Sept. 14, 2013, Joel Pakela, aka neighborhood fixture LES Jewels, was found unconscious on Avenue A at East Ninth Street. He died a short time later at Beth Israel. He was 43.

The Medical Examiner's office told The Villager that the cause of death was "blunt injuries of head," though "the manner of death is undetermined."

Memorials for LES Jewels in the East Village
Posted by Grieve at 5:49 PM

Many people seem to know who killed him. Could someone with a sense of justice speak out?

Ave A yuppies, your jugs of wine are safe RIP Jewels

Another crusty named Natas (that's Satan spelled backwards) whose pit bull attacked a couple of dogs and people last month was found dead. Does anyone know what happened?

Does anyone who knew Jewels and read a lot of his poetry think there's an audience if it were published? I only read a couple poems posted here/maybe at Bob's old site? and I thought he was pretty good.

Hard to be a saint in the city.

Anonymous 8:42, Some say it was the ghost of LES Jewels what done it.

Because it doesnt matter. He was our friend but he was a troublemaker occasionally and he got into a lot of confrontations. If it is who they say, then it was a. Messy drunken dispute and probably an overall accident. All these people hated the police and wouldnt want them involved no matter what.

The cops investigated and declined to press charges because they said [I heard] that they were not sure about who actually did it since there were reports he may have been attacked or gotten into more than one altercation. The woman who said in public she kicked him showed up at his memorial and threatened to beat people up who said anything to her.She is a very tough and large woman and no one wanted to tangle with her. Jewels himself would probably not have wanted someone to go to jail over whatever happened. I really miss him.