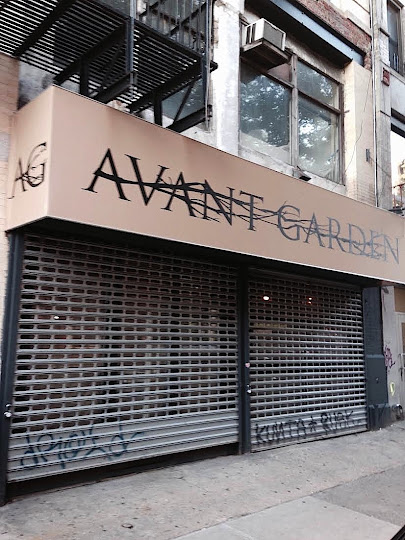 As DeRossi told Eater back in the spring:

D'Ambrosi put a hen of the woods mushroom dish on the menu that DeRossi, who "always hated mushrooms," loved. That dish turned out to be vegan, and so from there DeRossi had the chef begin experimenting with other vegan dishes, offering them as specials at Bergen Hill. Two years later, they've pulled together a list of about 20 that will make up Avant Garden's vegan menu. Those include things like charred onion with chimichurri and seasoned breadcrumbs, and roasted carrots with orange, honey, pumpkin seeds and quinoa, as well as that hen of the woods dish.

Here's a look at their menu… 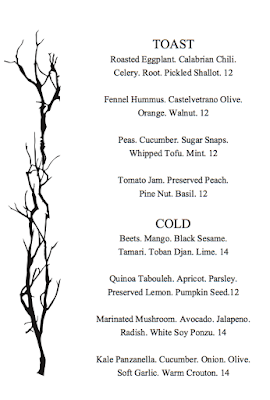 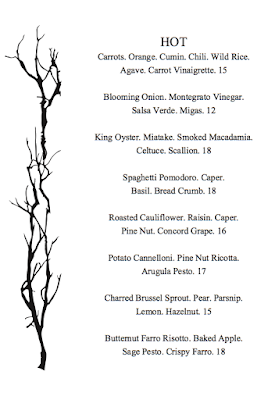 Avant Garden takes over the storefront here just west of Avenue A from Gingersnap's Organic, who decamped to the West Village in January.

Previously on EV Grieve:
Veggie friendly Avant Garden in the works for former Gingersnap's space on East 7th Street
Posted by Grieve at 4:10 AM

I swear I'm going to save up to go here—but I hope someone clues him in that honey isn't vegan.

Also, I'm happy to support BEAST in any way I can.

We switched to agave prior to opening last night, thanks.

Cool name. I'm sure I will never buy anything from them, but it's a cool name.

Either 12:39 was the worst attempt at anonymity in the history of the universe ...


(Cute ominous version of "The flight of the bumblebzz.")

I am a fruitarian. We are ever more disciplined than even vegans probably. We only eat fruit that has fallen from the tree and that isn't harvested. Anything otherwise would indicate murdering/destroying a plant and fruit. We only eat nuts, certain seeds, honey, raw fruits, and some beans. And water. That's it. It has completely transformed my life. I've lost a ton of weight, have no intestinal/digestive issues, and am able to think clearly. I wish this restaurant the best, but don't know what I would be able to eat as a patron.

You're not clear here; are you saying honey is a fetish or refusing to consume any animal product is a fetish?

There are some valid reasons not to consume honey, including:

1) Bees need it more than we do; when beekeepers "harvest" it, they replace it with non-nutritive sugar water. Therefore, "keeping" bees doesn't really help the bees.

2) Honey is literal bee vomit. No way to sugar-coat that, so to speak.

3) Anonymous 5:26—Bees are animals; they eat, breathe, reproduce and excrete like animals. For all intents and purposes they're animals.

4) Anonymous 10:07—They'd probably work with you as to preparing dishes to order. But again, why honey? Do you keep your own hive or something out back?

Awesome awesome flavors. Game changer type of restaurant. But not sure of plush seating which though comfy adds bulk to a relatively compact area for which is being demanded from it.

Fantastic! So happy to welcome them to the EV - the future of food and ethics

I think this place sounds delicious.

The menu looks good. I will try this place. Yet another friend dragged me to Angelica Kitchen this week. I love the people who work there but they need to try some new recipes. The food is tasteless, and vegan and vegetarian food can easily be so delicious. There is no excuse for it. I am hoping some of the new places will be more creative with spices.

I am a Fruit-Gravitarian. We are even more disciplined that Fruitarians probably. I only eat fruit which has fallen from a tree and has been caught by myself before hitting the ground. Millions of innocent insects die, and thousands of animals are injured at the hands of falling fruit that is allowed to hit the ground every year. It has completely transformed my life. I wish this restaurant the best, but don't know what I would be able to eat as a patron... unless they have a fruit bearing tree on the premises that I may camp out under in the hope that it would drop a piece of it's life-giving fruit into my hands.

The last comment was fucking hilarious. I've never heard of a fruitarian in my fucking life. I'd seriously die if I didn't have beef, beers, and ice cream.

There is a great fruitarian riff in the film Notting Hill...