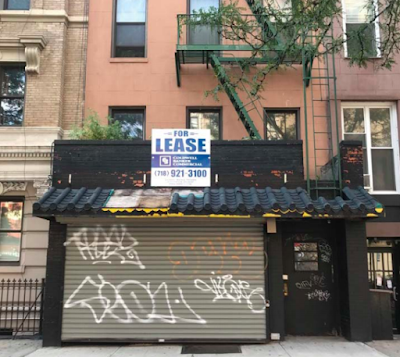 A group of applicants whose résumé includes bars and restaurants in the Bowery Hotel and Arlo NoMad Hotel are looking to open Black Emperor at 197 Second Ave.

The applicants, including David Massoni and John Bush, will appear before CB3's SLA committee tonight for a new liquor license for the former Schoolbred's space between 12th Street and 13th Street.

According to the detailed application at the CB3 website, Black Emperor would include nine table for 35 patrons as well as a 10-seat bar and a four-table sidewalk cafe. (Shoolbred's was also licensed to operate on the sidewalk.)

The food is described as "Asian fusion tapas," and here's a look a the menu via the application... 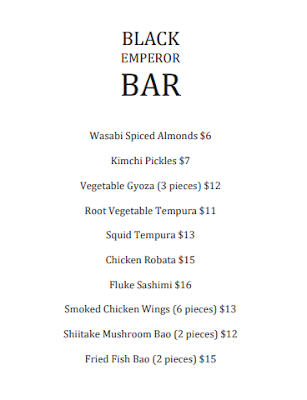 Black Emperor would open at 5 p.m., with a closing time of 2 a.m. Monday through Wednesday and 3 a.m. Thursday through Saturday. (And 1 a.m. Sunday.)

Massoni and Bush have opened several establishments via their Three Kings Restaurant Group, starting with Thistle Hill Tavern in Park Slope as well as the above-mentioned hotel spots. (East Village residents may know Bush from his days bartending at 2A and Niagara.)

Shoolbred's closed in June 2017 after nearly 10 years in business.

What community input would make any difference?? It's like there's some rule that says you HAVE to have a certain density of bars around here, otherwise we're not really a happenin' neighborhood. As in: If you can walk more than 1 block without encountering a bar, something's amiss. (OR if anyone within a one-block-radius can sleep at night without being awakened by the oh-so-entitled party-crowd, then something is amiss.)

I'm trying to submit a news tip. Is there an email address or link available to do this?

Now that they're up and running, their menu is pretty different--and pretty amazing. Really good eats and worth the moderate price. John Bush hired Chef Jae Lee, an up and comer as it were, and it seems he Jae is bringing elevated Asian childhood treats along with some classic bar eats. I like this spot.