St. Dymphna's is closing this weekend after 24 years on St. Mark's Place 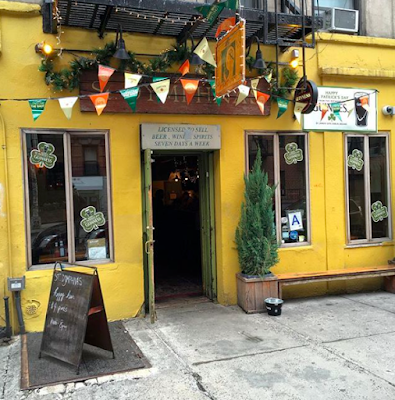 A reliable EVG tipster said that St. Dymphna's, a neighborhood hangout at 118 St. Mark's Place between Avenue A and First Avenue, would close after service this Saturday, Oct. 20.

We did receive official confirmation on the closure. We reached out to the owners for more information on the decision to close St. Dymphna's, a favorite local spot known for its perfectly poured pints of Guinness and traditional Irish breakfast.

The pub, named for the patron saint of the mentally ill, opened in 1994.

In 2017, Conor Oberst had a song titled "Till St. Dymphna Kicks Us Out" on his Salutations album. The video was filmed at the bar... seems like a nice way to end this post...

Meanwhile, the St. Dymphna's Instagram account is now posting photos with #rememberingstdymphnas.
Posted by Grieve at 6:00 AM

Sad news, this is a great local bar.

A total shame. I would drink shots of Paddy & pints of Guinness & weep in the corner. It was a good pub like that

Wow. This is upsetting.

let me guess.....replaced by some sort of asian restaurant, likely dumplings? Or maybe rolled ice cream? Or better yet, asian dumplings filled with ice cream?

The EV is for transients, not residents. It was decided for us.

Comfortable place. However NOT A GREAT BAR.

Celebrate the Green there every 3/17.

For some of us with long memories, the East Village has been over since the *opening* of Yaffa Caffe.

Yikes, I remember when this place opened!

It was an exciting place to watch the World Cup, with a plate of their excellent fish and chips. I wonder if and how this relates to the closing of their Portuguese restaurant across the street. (Parenthetically, if you think that the East Village has a lot of tourists and transients to the detriment of the locals, visit Porto sometime.)

I am sorry to see this place go. I remember when this bar first opened under the original Irish owner. Also the owners referenced above who took over this spot many years ago were very nice but they failed here because of a bad bartending staff.

I remember when they had a great backyard which they had to close over 10 years ago unfortunately.

They had bad people in place for many years in charge of the bar. I witnessed bad service here many times and the staff could care less it was like they owned the bar and I guess in a way they did own it.

The owners seemed much more focused on the catering business and did not pay attention to their staff who just ran amok in this place.

Again I am sorry to see this place closed but it simply lost people to Bua and 4 other bars on the block that all have a better vibe due to bartending staff.

Also this bar was way to focused on its regulars and it became way to cliquish.

The Irish breakfast ceased being good about 10 years ago. The food here was way overrated and with increasing food and bar competition this place simply could not hold up.

I do wish the owners well but I wished they would have stepped in here long ago and had better control of their staff.