The NYPD is searching for a suspect who shot at a man as he ran into the Ace Bar on Fifth Street Monday night.
According to police and media accounts, the shooter approached a man on Fifth Street just west of Avenue B. Surveillance video that the NYPD released shows the victim running into the bar at 531 E. Fifth St. for apparent cover at 11:11 p.m.
The gunman, standing on Fifth Street, then fires one shot, hitting a lower section of the entryway. The gunman, wearing a hooded gray sweatshirt, sweatpants and a surgical mask, looks both ways before leaving the scene.

Police released video of the shooting outside @AceBarNY in the #EastVillage. Looks like a gunman was running down 5th Street on Monday, shooting at the victim who ran into the bar for cover and a bullet went through the window. The victim didn't file a report. cc @evgrieve pic.twitter.com/nznScFDjpB

NYPD sources told the Post that the victim "may have been misidentified as another person who had already run off."
Per amNY, the victim was not injured and quickly left without speaking to the police. Neither man had been a customer of the bar, sources said.
An EVG reader shared a photo of the bullet hole left behind from Monday night... 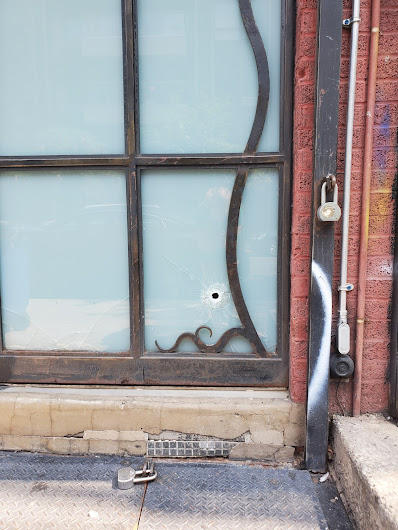 Adam from LLN NYC captured this footage of the NYPD investigating after the report of the shot fired... as the video shows, police blocked off Fifth Street at Avenue B as detectives canvassed the area around the bar...
Anyone with information that could help in the investigation is asked to call Crime Stoppers at 1-800-577-TIPS (8477). You may also submit tips online. All calls are strictly confidential.
Posted by Grieve at 12:00 PM

There are way too many people walking around with guns these days, and too many unsolved cases. We still have two unsolved murders which both happened on 1st Avenue over the past 2 months. With all this technology and manpower, the police still can’t seem to solve, much less prevent, the vast majority of major crimes.

The precinct here does nothing. People will arm themselves if they don’t do their job

The East Village, if not of all NYC, seems to be suffering from some sort of psychosis of violence lately.
I keep harkening back to what Travis Bickle from TAXI DRIVER said....

“Someday a real rain will come and wash all the scum off the streets.”

One can only hope.

Those videos are really disturbing.

Obviously the police are solving the vast majority of major crimes, you just have to read the news.

Rise in crime - complain to the Mayor, who is doing nothing and
hindering the police.

Let me see if I can figure this out. The East Village is one of the state/city designated "party neighborhood / nightlife" zones. Drinking impairs a lot of things like thinking straight and sometimes dangerous impulses, which can lead to fights or on the extreme end murder. The neighborhoods is saturated with drinking spots and many more are on the way. The Cuomo/De Blasio illegal restaurant and bar shed mandate brings it all out into the open so stray bullets deaths could likely become a common occurrence.

40 years ago the lower east-side had its own drug industry with gangs controlling blocks at a time, it was a depressing only option for young unemployed people who saw no other way to earn money. Many blocks were relatively safe for their clients (white middle class) young people for much better neighborhoods. There were lots of guns, robberies and a police force which often found it too crazy or not worth the bother.
See the parallel yet?

Let's be clear... yes guns are a huge issue, but what's more concerning is the fact that people will shoot them INTO an open bar with horrible aim. Like that shot wasn't even near the entry door and anyone could have caught a bullet. Very lucky no one did.

Heard it from apartment above the bar. People arguing for a few minutes in front of Ace Bar and then a shot. Someone rode off in a white SUV and it may have been the person who was shot at. Why didn't they leave a police report? At least four cops cars showed up after, since they have been slow this past year to respond at all. I guess we should be good citizens and wait for the arc of social justice to correct itself? Can't wait to have a mayor who does something instead of wearing a clown suit 24/7.

I absolutely do no see the parallel in your spurious argument.

Ace Bar and bars in general have nothing to do with why this happened. And no one are not better off with drug dealers policing... for all we know this was drug/gang related. What it wasn't related to, was drinking in the east village.

And for anyone surprised, yes there are a lot of guns here.

It is not one of the state/city designated "party neighborhood / nightlife" zones, because such a thing does not exist. It was a suggestion by the nightlife management in the mayor office.

Actually it's the opposite, the mayor is pandering to the police so much since his failed rebellion in his first year, just look at his support of Adams. But the cops, being cops, and non New Yorkers most of them, are just taking advantage of his weakness towards them, and doing the Numan strike, meaning still collecting the checks, just not delivering the mail... Or call it the Trump revenge, by their unions.
Sorry to spoil the very continent myth about the mayor stopping the police of doing their job.

According to the NYPD themselves, the police are solving on average only one third of all serious crimes, including murder. That number fell to 25% last year during the peak of the pandemic. Serious crimes include shootings, stabbings, assault and other violent crime. Unfortunately the news does not cover this fact, which is why people actually think most serious crimes are solved. They are not.

Today on 9th St and Avenue D two men were shot in broad daylight. Let’s see how long it takes to solve this crime, in addition to the two recent murders on 1st Avenue. Don’t hold your breath.

Mayor disbanded the police Street Crimes Unit whose main purpose was to get illegal guns off the streets.