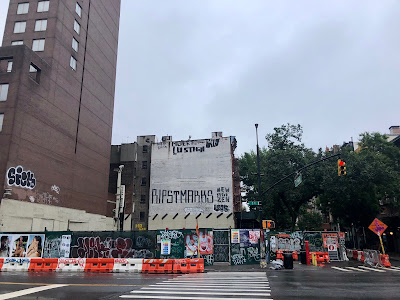 The Real Deal is reporting that Madison Realty Capital is moving to foreclose on Real Estate Equities Corp.'s (REEC) leasehold interest at 3 St. Mark’s Place.
Some numbers and background from TRD's report:

An REEC spokesperson said that they "are working on a recapitalization plan and are optimistic that this will be resolved in the near future."

This is the latest drama for the high-profile corner. As previously reported, a 10-story office building has been in the works here at 3 St. Mark's Place at Third Avenue.

This past October, the City Council's Zoning Subcommittee voted down REEC's application seeking to transfer air rights from the landmarked 4 St. Marks Place to the new building across the street.
With the air-rights transfer, REEC would have been allowed to build 8,386 square feet larger than the current zoning allows on the northeast corner.
Regardless of an extra 8,000 square feet, the project's architect, Morris Adjmi, has said a building of a similar height size would be built as of right.
REEC picked up the 99-year leasehold for the corner properties for nearly $150 million in November 2017. The Gabay family had owned the buildings for generations.
The previous buildings here, which included retail tenants such as Korilla BBQ, the Continental and McDonald's, were demolished in the summer of 2019. 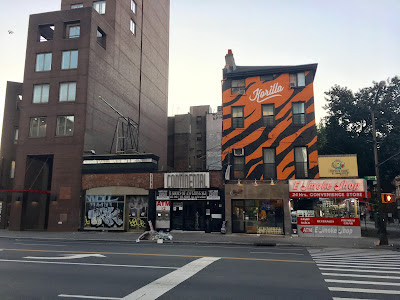 What's the Gabbay link from 2014 about 225 First Ave has to do with this address?

Because the article from 2014 has more background on the Gabay family, who owned the buildings on the corner of St. Mark's and 3rd Avenue:

Sam Gabay, a Turkish immigrant, began selling extras from garment factory floors in a pushcart on the Lower East Side in the 1920s. He eventually opened his own shop at 1 St. Mark's Place in 1940, one of several locations the store would call home in a 10-block radius before settling in at 225 First Ave. in 1970.

The st marks pizza building was so beautiful and historic, disgusting to see this.