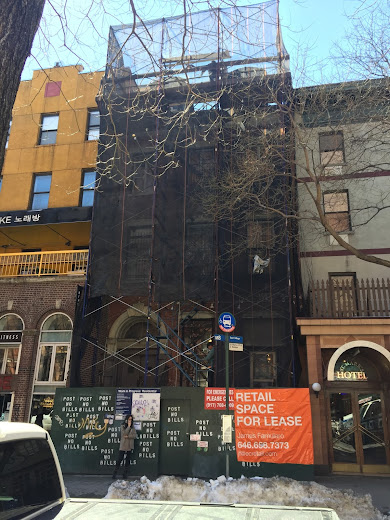 Workers have put up scaffolding and construction netting outside the landmarked 4 St. Mark's Place.

As reported this past December, the Landmarks Preservation Commission (LPC) signed off on renovations and an expansion for the Hamilton-Holly House (aka 4 St. Mark's Place), built in 1831 and sold to Alexander Hamilton’s son two years later.

The LPC nixed the additional floor, and a few other items. As it looks now, the expansion in the rear of the building will double the number of residential units from three to six.

Here's more about what will be taking place via New York Yimby, reporting on the LPC meeting last December:

More residential units and a 5th-floor addition in the works for landmarked 4 St. Mark's Place
Posted by Grieve at 4:30 AM

What exciting news. This shows the vibrancy of the neighborhood. Of course there will be a coterie who view this as a destruction of their vision of what the East Village should be. A city is a vibrant living organism, and the fact that such investment is being made is a sign that business people see a future in the East Village.

@10.02
The East Village and NYC as a whole is not located in the American Rust Belt We are a city that has always attracted the best in the world, a hotbed of industry, arts & culture and have not needed the real-estate industry to make us a "vibrant living organism" as you mention. In reality the real-estate / developers have had the opposite affect and is stamping out a vibrant living city, block by block, neighborhood by neighborhood. I would be quite surprised if you were not someone who benefits for that industry or have you not noticed how expensive it is for the non-rich to live here now?

^10:02 "business people" got it right here because it was landmarked and they had to... you should still bey very very weary of your "business people" getting it over on the working and middle class that made NYC, and their brave local politicians and programs trying to defend them in vain. This would've been a mini glass death star if local ordinances would have permitted it to be.

Let's see what retail business ends up here before we get all excited over this. Will it be vibrant, living and organismic like Trash & Vaudeville, or will it be yet another shitty fro-yo front? Or better yet, sit empty for years while owners like Icon reap the tax losses. Lemme guess...

Anon@12:52: You are right, NYC is not the Rust Belt; but if you read this blog prices for food, rent, and all amenities should have remained frozen at the level they were in the 1970s or 1980s when many of the people who post here made the magical discovery of the East Village (I've been here since 1966.) And Anon 1:57, I am sorry I don't know any "brave local politicians." Thank the greater Gods for term limits--otherwise some of the "brave" would be with us forever. As it is Albany politicians are not term limited.