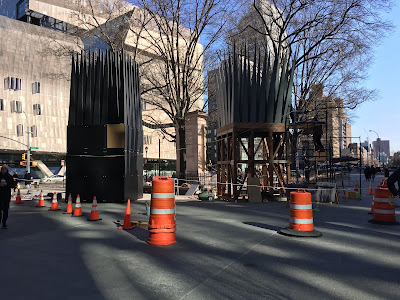 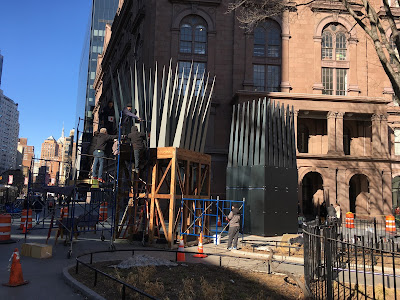 This is part of a month-long exhibit that starts next Wednesday.

Previously on EV Grieve:
Celebrating the work of John Hejduk at Cooper Union
Posted by Grieve at 5:37 PM

Does anyone know how long these piece will be on display here? They are quite "somber" to say the least good thing spring is (coming) here.

somber? I'd consider them as an eyesore.

Anonymous 6:14, If I'm reading the information in the link correctly, the exhibition runs 29 March through 11 June.

I like these strange spiky things, for some reason. It's as if the Cube turned evil.

Why do I look at these and think Game of Thrones?

I love the Pauly D haircut sculptures. Must have been a huge Jersey Shore fan.

I'm going to head over there tomorrow; I'm a huge fan of John Hejduk.

fyi installers, think you did it wrong:

"The two structures are locked in a dance; they are meant to be installed facing one another at a distance of four or five meters. The suicide’s house (angled spikes) is sealed so that the viewer can only imagine the experience of its entombed inhabitant. Entry to the mother’s house (vertical spikes) is possible via a small opening at its base. Inside the cramped, womb-like space a raised platform permits a single visitor to peer through a small aperture and thereby to contemplate the facing House of the Suicide, the only possible view, the view that haunts the mother."

the mother house aperture seems to be facing away from the other sculpture, not toward it.