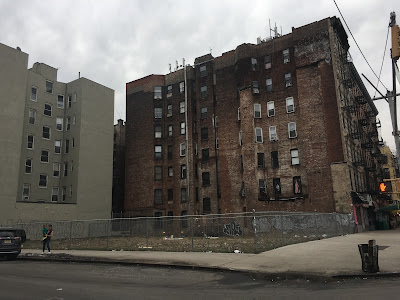 On the 2-year anniversary of the deadly Second Avenue gas explosion, the Post is reporting that landlord Maria Hrynenko "is poised" to sell her now-empty lots at 119 and 121 Second Ave., which could jeopardize the settlements of the victims.

Maria Hrynenko, 57, appears ready to cash out on her valuable Second Avenue properties before the criminal case against her goes to trial and as the civil actions wend their way through the courts...

Hrynenko could rake in at least $12 million, based on the sale price of a neighboring lot, if she sells both her parcels.

Authorities have said that siphoned gas at 121 Second Ave. is to blame for the explosion, which killed Moises Ismael Locón Yac and Nicholas Figueroa, and injured two dozen other people. A 21-year-old student visiting from Berkeley during spring break lost an eye and fractured his larynx. Two firefighters also suffered serious injuries.

In February 2016, the DA charged Hrynenko and her son, Michael Hrynenko Jr., with involuntary manslaughter ... as well as contractor Dilber Kukic and an unlicensed plumber, Athanasios Ioannidis. (A fifth person, Andrew Trombettas, faces charges for supplying his license to Ioannidis.) All pleaded not guilty.

More than two dozen lawsuits have been filed against Hrynenko, her companies — MAH Realty and Kiev Realty — the city, Con Edison and other defendants.

Lawyers for the victims say it would be virtually impossible to stop a sale — as long as it’s for market value and not to a straw buyer — and that the potential $12 million-plus windfall could be difficult to locate.

“Let’s say she sells the property and takes the cash and stashes it away in the Canary Islands, there’s no way for us to recoup that,” said Marius Wesser, a lawyer for Machendra Chongbang. The Nepalese immigrant was a chef at Sushi Park and was badly injured when he was blown into the basement.

According to the Post, a broker working with Hrynenko recently contacted the new owner of the lot at 123 Second Ave., who paid $6 million for the property. The broker reportedly said they had a buyer interested in purchasing all three lots.

However, the owner, Ezra Wibowo, declined the offer.

“For him, it’s a long-term investment. He’s not in a rush to build or develop,” the source said.

And read our interviews with longtime residents of 45 E. Seventh St. Mildred Guy and Diane McLean.

How is this even legal? How can this despicable monster profit this way? How can those profits not be immediately seized and placed into escrow until the civil lawsuits are finally settled? What a disgusting and shameful state of affairs. I truly hope this woman burns in Hell when she finally kicks the bucket.

The whole family is a flight risk -- hoping they are banned from travelling :)

But seriously, they owe that money to the families of the victims.

I agree Gojira, this is outrageous. If this was a murder investigation and a taxi was involved, they could seize the taxi, medallion and all, as evidence until the trial was over. Why can't they seize the property since it is a crime scene? If Hyrnenko sells she can hire the best lawyers in the country for herself and her son with money that should go to the victims. And I bet that's exactly what she's planning to do.

She's not selling those buildings for 12M cash as that is illegal i.e. withholding income taxes. She will have report that money as income and when she does the victims should and I think would receive every penny of it. She should be audited.

She should be required by NYC to put any money from the sale into an escrow account for payment of claims. Or else the victims' lawyers should put liens on all these lots, liens which I believe would transfer to future owner(s) of the properties.

But the bottom line is still: 2 people are dead because this woman and her son and their plumbers were willing to do illegal activities AND to lie about those activities to NYC and Con Ed. There ought to be a way to prevent her from EVER profiting from those parcels of land.

I too am confused as to how this is legal. Grieve, can you ask a lawyer?

I'm not sure if the victims really have the best attorneys representing them. Or, they need to hire an additional Real Estate attorney for their specialization.

The plaintiffs need to immediate sue Hyrnenko and get a temporary injunction from the courts to stop her from selling the property, on the basis that the defendant will become a flight risk if the sale is complete. Even if the injunction fails, having a suit in progress will delay any sales, hopefully to the effect of having the criminal trial proceed first. If the plaintiffs work together, they can file suit after suit should one fail, to keep delaying the sale of this property.

These victims should hire Charlie if he's a lawyer (are you Charlie?)

Many of the plaintiffs have already sued the owner. And an injunction on the sale would be very difficult to obtain. There are limits to what a civil court is permitted to do.

According to the Manhattan District Attorney's office, the Maria Hrynenko case is still open. Her next court appearance is:

I called DA Cy Vance's office and talked to a staff member, letting him know that many local residents are enraged about Hrynenko's possibly profiting from the sale of the property. I reminded him him that they should act swiftly to prevent anything like this from happening. It can't hurt to call.: 212-335-9000

She can't sell the buildings and walk away with all the money. If she does these victims have shitty lawyers who should have their licenses to practice law revoked or at least never be hired again.