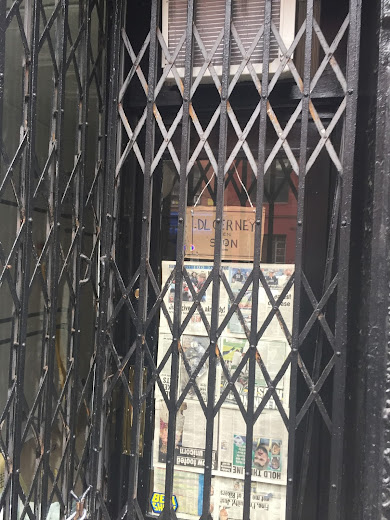 In the past two summers, the D.L. Cerney boutique returned to the East Village, selling its hand-made, vintage-style clothes in a pop-up space on Ninth Street between First Avenue and Second Avenue.

D.L. Cerney closed up shop on Seventh Street at the end of 2012 after 28 years in business. At the time, co-owner Linda St. John told Jeremiah Moss that the closure wasn't about rent, just about time. She wanted to leave the city for awhile and focus on her art and writing.

There isn't any word on an opening date. The space was previously home to Dusty Buttons, which closed last month.
Posted by Grieve at 4:20 AM

My favorite men's clothing store of all time. This will be a welcome, if ultimately wallet-thinning, return.

wow, that's a name form the past. remember going to the 7th st store back in the 80s, always had cool stuff. good luck.

Welcome back! Wonderful store and kind, creative owners . . . 9th Street has managed to preserve--at least partially--some of the neighborhood's true richness. This is such good news!

I don't know whether to be happy or sad. SOOO wonderful to get DL Cerney back - for women and men, I hope - their leaving was HORRIBLE. But -- what happened to the Dusty Buttons reboot? Love, love that store too. ARGH