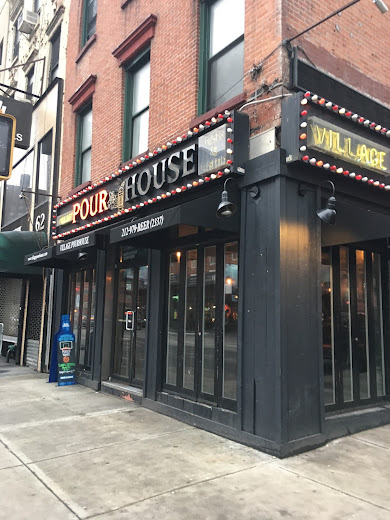 Word is circulating that Village Pourhouse, the pub-crawling hosting hotspot, is closing on Monday. A tipster told us that management informed the staff last night.

However, the sports bar, which opened in the summer of 2006 on Third Avenue at East 11th Street, shouldn't be empty for too long.

The teaser site for E.Vil, the incoming rock club reportedly inspired by CBGB and Max's Kansas City, lists 64 Third Ave. — the current home of Village Pourhouse — as its address... 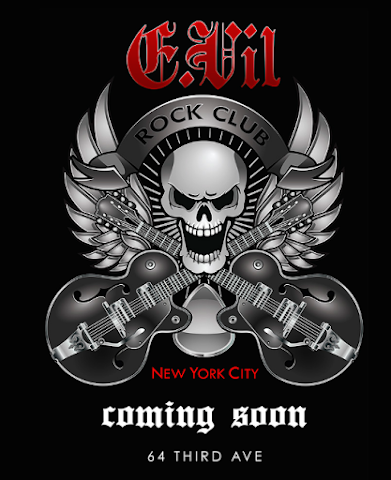 This new venture via, among other partners, club owner Richie Akiva, is "where you go to hear Aerosmith, the Clash, Guns N’ Roses, Led Zeppelin, ’80s/’90s rock, the Cult," one source told Page Six.

E.Vil is expected to open on April 17, according to their Instagram account. They were not listed on the April CB3-SLA committee docket released yesterday for a new liquor license.

Previously on EV Grieve:
E.Vil is coming to the East Village (31 comments)
Posted by Grieve at 4:28 AM

ooh, cool, that skull is so bad ass and mean!

Just when you think things can't get worse...

Hey E.Vill, the 1980's called and even they don't want their music back.

I love the music of that era, but I am old. It's not going to draw in the millennials who have taken over the neighborhood.

I predict E.Vil will be E.Victed in less than nine months.

Remember when this spot was a Chicken Rotisserie forget the name. Pour had a good run down here if it makes ten years it's a legend commercial lease was probably up.

The Moxey Affect. That whole area is going to change to cash in on the hotel and the ignorant expectations of their guests - the edgy EV.

The Pourhouse is a nightmare. I'm all for nightlife venues in business districts with lots of insulation and no neighbors in sight but this aint the place.

For a second I was happy... Then I saw what was coming next.

I often pickup lunch at Ciao for Now on 12th street, the owners play a mix of music but a good chunk of that is post punk, new wave. I asked one of the youngster that work there if she enjoyed the music she admitted to "hating it". She's a trendy young women so I thought she might say yes. I doubt there will be enough Moxi millennial into that era's music to make this place any money, the logo does look to attract the grown up skate board crowd though.

That moxy will be a homeless shelter 6 months after it opens.

so ya'll want the Pourhouse to stay then? Do I have that right? Just judging by the comments I'm guessing yes. #neverpleased

This is a storied location which has seen many changes over the years. Before the Village Poorhouse (pun intended) it was a Roll-n-Roaster, a grease pit out of Brooklyn that specialized in Heart Attack on a Bun HamBurgers and Roast Beast. With any luck this spot will soon be a pawn shop again. via NY Songlines:

Note: The Penang Bar & Grill was a copycat ripoff created by the brother of they who started the now defunct Penang chain. via the Ny Times from AUG. 7, 1996:

"Though Penang Bar and Grill, which opened this week in the East Village, on Third Avenue near 11th Street, looks like the other Penangs in Manhattan, it is not owned by Mr. Cheah but by his brother Michael. ''My brother copied every single concept,'' Suan Lee Cheah said. ''I won't sue him, because he's my brother, but that is why our new restaurants are not named Penang.''

The lesson: If you're going to rip off a concept, at least use one that's going to last. I doubt that E.Vill falls into that category.

Jeez. Out of the frying pan, into the fire!

Roll n Roaster was great. It is much missed!

I for one am going to get tattooed up again, shave my head into a mohawk and put my nose rings back in for this

Hey! That skull has eyebrows!

That's a huge blow against SantaCon.

They should pay a junkie to stab you as you walk out. That'd really take you back to the 80's.

The idea sounds cool if they actually stick to rock n roll and don't try that we play 2 rock songs followed by 10 hip hop ones. Also the flyer artwork is outdated and a horrible promo. Looks more like it be a biker bar playing bro rock, need a better designer. But high hopes for it

this entire area is people from 18 to 26. Im here and old but The pour house was decent...should of stayed.