Pizza-master Gino Sorbillo marks his arrival on the Bowery 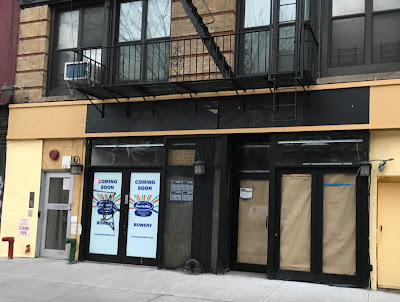 As noted back in January, a pizzeria is coming to 334 Bowery between Bond and Great Jones... and the signage for Sorbillo arrived on Monday... 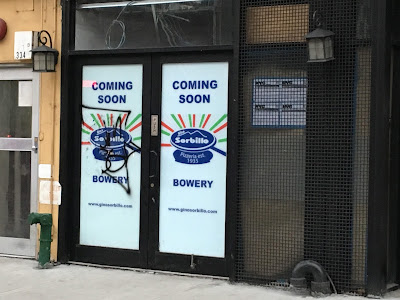 Acclaimed pizza-master and globe-trotting food personality Gino Sorbillo is the Sorbillo behind this venture. His shop, La Pizzeria Sorbillo, is considered by some to be best and most famous pizza hub in Naples, according to this feature on Vice.

This has been a tough spot for restaurants. Perhaps Sorbillo can reverse the streak of quick openings and closings.

The space was home to Forcella Bowery for nearly three years until November 2014 … only to be replaced in December 2014 by the tapas-friendly Espoleta, which closed six months later to make way for Gia Trattoria. They quickly closed. Then PYT arrived in October 2015.

Previously on EV Grieve:
A step back in time on the Bowery
Posted by Grieve at 4:02 AM

Gino had better build a big delivery business, because this area so dead that even Martin Luther King's dreams couldn't survive here. Welcome to The Bowery, where dreams go to die.

How do you keep up with all these people? I have never heard of this world famous Gino Sorbillo. I guess foodie-ism is like a professional spectator sport now. In that sense I am a total dweeb, with no clue about who the cool, popular stars of the moment are.

yayyy more chichi pizza that is uncooked in the middle and all the cheese and toppings run off. Danny Meyer has competition, good, let the free market reign... and these places close.

This looks like something I could make at home with fresh dough bought from a pizzeria, a ball of fresh mozzarella, and a jar of Colavita brand tomato sauce.

easy fake pizza is to use some leftover pasta, or any bread toasted - with a favorite sauce and cheese and whatever on top.
works in toaster oven too.
even great with cheddar cheese.

i call it spaghetti pie

Looks pretty tasty, for a tomato sauce and a ball of mozzarella which actually is not so big deal to be done at home too...

The brighter red the sauce the more sugary it is. I had a slice where the sauce was so sweet I threw that shit out. Gross.