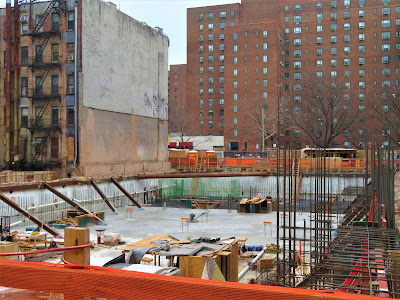 As noted yesterday, reps for the developers of 432-438 E. 14th St. were to appear before the Board of Standards and Appeals today to seek a variance on their mixed-use building between Avenue A and First Avenue.

However, before this morning's hearing, Benenson Capital Partners and Mack Real Estate dropped their application for the zoning variance, according to the Greenwich Village Society for Historic Preservation (GVSHP).

Facing opposition from community groups and residents in previous meetings, the developers cut back their request by two-thirds. Their new proposal sought nine stories on the East 14th Street side of the building, one higher than the eight allowed under the current zoning.

The developers had claimed that the property "is burdened by a combination of unique conditions that result in practical difficulties in complying with the applicable zoning regulations."

The GVSHP was among the groups opposed to the zoning variance. GVSHP held a rally this morning with residents and union members before the hearing was to take place.

"This is a victory for the East Village and all New Yorkers who care about preserving our neighborhoods and ensuring that everyone plays by the same rules," GVSHP Executive Director Andrew Berman said in a statement. "We have reasonable parameters for the size and height of new developments in our neighborhood, which protects the East Village’s unique character. This developer showed no legal justification for being exempted from those rules."

The current approved plans on file with the city show an 8-story building with 114 residences (reportedly 23 affordable, 91 market rate) and ground-floor retail. The residential entrance to the building will be on 13th Street while access to the storefronts will be on 14th Street.

A look at the new building coming to the former Peter Stuyvesant Post Office property
Posted by Grieve at 12:00 PM

It's a great day for the EV and the power of protest.

I went to the rally this morning and there was a nice turnout from union members (32BJ) who have a dispute with the developer over another building he owns, and community members. Thanks to GVSHP for organizing around this issue, and thank you EV for letting us in the community know about it.
With all the development pressure our neighborhood is under, its really important to adhere to the zoning -- we already upzoned in exchange for preserving the lower-density parts of the neighborhood.
432 East 14th Street will still be an ugly building, per the renderings I've seen, but it will be in scale.

Great news thanks to everyone involved in this.

Fantastic! Thanks to all that came out against this variance and a big thanks for those that showed up in the rain today.

In other words: 'We redid all the numbers, and realized that the East Village real estate market is so overheated that we are still going to make a boatload of money. Nevermind."

Thanks to all involved in getting this outcome, esp. GVSHP for its ongoing efforts.

@Giovanni: Maybe they're making a boatload of $$ - but it's a boatload MINUS the ton of $$ they had to pay their lawyers.

I really enjoy the protest sign in the Town & Village article saying CONDITIONS KNOWN SINCE 1865 using the Viele 1865 Topographical map. Here's the site in red where the stream is: http://i.imgur.com/MfE21jl.jpg

Great news. Thank you to all who protested, showed ire and called for justice. (And thank you Morgan Tsvangirai for that cool map.)

Great job, everyone! I was only able to be there in spirit, so many thanks to everyone that showed up today!!!

That's a great map, Morgan, but I'm sure the Native Americans knew about this water condition well before 1865, which is one reason why they never put up any tall buildings in the area.

Let's hope this reins in the hypergentrification that's been going on over the last several years.

I live next to this site. A 12 story building probably would have blocked the sunlight so much that my 4foot tall houseplants next to my Southwestern window - which currently receives plenty of sunlight - would probably have required expensive plant lights and a substantially higher electric bill to keep these plants alive and healthy! I really need these plants, to filter out toxins and help provide clean air in my apartment since I have asthma and am very sensitive to chemicals and pollutants. Thank you so much to everyone who helped to cap the building at 9 floors! I wish it was only 8, but 9 is substantially better than 12!

This all started when residents from north Avenue A, 12th and 13th streets met with the developers who were seeking support for their BSA application. The residents informed the developers that supporting their application was out of the question. Consultant for the developer told the residents that the BSA would approve their application and that they were really there to talk about construction noise and the different types of retail they would be providing at the location. Every step of the way including at two CB hearings residents were told that there was nothing that could be done. But because of their opposition the CB voted twice to deny the variance which ultimately led to the BSA denying the variance. Then they came back and withdrew.

Good news, it is only 8, thanks to everyone involved in this issue.

Re 8:48 - thanks to residents and our Community Board! When GVSHP wins, it's because they have PEOPLE POWER!