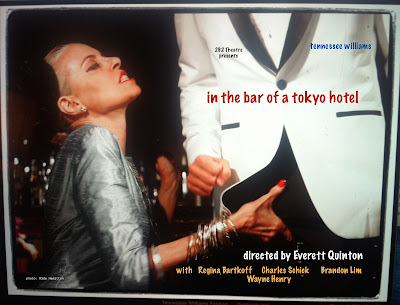 Longtime East Village residents Charles Schick and Regina Bartkoff are involved again in a production of Tennessee Williams' "In the Bar of a Tokyo Hotel" at 292 Theatre/Gallery on Third Street.

Here's more about what to expect starting tonight:

A happy hedonist wife has come to the end of her patience with her husband, a forever-experimenting artist. The late 1960s resounds throughout Tokyo Hotel in masterful staccato rhythms, which serve as breaks in the lilt of Williams' earlier dialogue.
This intense and personal late-60s Williams one act features the original cast of the 2012 New York production.

Charles Schick and Regina Bartkoff are both well-acquainted with the more experimental plays that Williams wrote late in his life, which have been enjoying a renewed interest in recent years. Charles Schick played in "The Strangest Kind of Romance" as part of a touring Tennessee Williams festival in early 2011, and both he and Regina Bartkoff had roles in "Now the Cats With Jewelled Claws" that same year along with Everett Quinton and Mink Stole. Their original performance of "In The Bar of A Tokyo Hotel" in 2012 received rave reviews. In 2014, they gained even more recognition in their hilarious and beautiful rendition of "The Two Character Play," starring as deranged brother/sister duo Felice and Claire.

Most recently they resumed the roles of Miriam and Mark for "In the Bar of a Tokyo Hotel" at the Provincetown Tennessee Williams Festival.

Located in the East Village at 292 E. 3rd St. between Avenues C and D, 292 is a small house of 20 seats with big theatrical gifts in the tradition of Caffe Cino and other exceptional, influential tiny stages of the 1950s and 1960s. Charles Schick and Regina Bartkoff have been mounting plays here since the early 1990s, when the building was a squat surrounded by other squats. The first play they performed here was their own version of Medea.

The play starts tonight ... through March 25. (The performances are Wednesday through Sunday at 8:30 p.m.) Tickets are $20 and available here. Find out more a the Facebook Event page.
Posted by Grieve at 12:00 PM

Email ThisBlogThis!Share to TwitterShare to FacebookShare to Pinterest
Labels: 292 Theatre