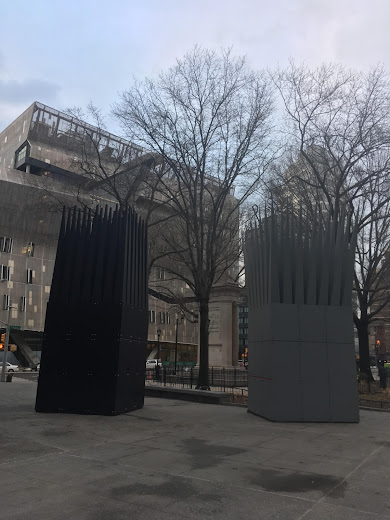 Known as the Jan Palach Memorial, which was permanently installed in Prague in 2016, this is the first public exhibition (via Cooper Union and the Department of Transportation) for the recently revamped Cooper Square plaza.

Curbed has more today about the project.

To install the outdoor sculptures ... Cooper Union assembled a team of current students and alumni. Hejduk was a big believer in the “social contract” of architecture, so the school wanted to assemble his work in that spirit.

Over two weeks the Cooper Union team, using power tools and socket wrenches, assembled 400 pieces into both sculptures. They used a wooden yoke to carry each of the 98 spikes onto the roof of each structure, which is 12 feet off the ground. The spikes — which weight about 100 pounds a piece —then project another 12 feet into the air. The framing of both sculptures is made of cedar timber, while the spikes are made out of sheet metal welded together.

This is part of a month-long exhibit featuring Hejduk's work that starts today. The sculptures will remain through June 11.

Here are some photos from later today via Vinny & O... 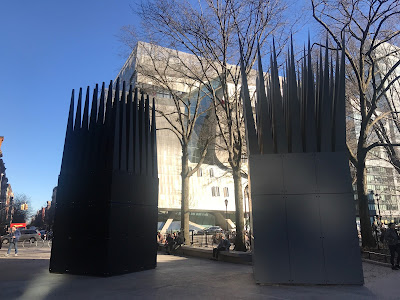 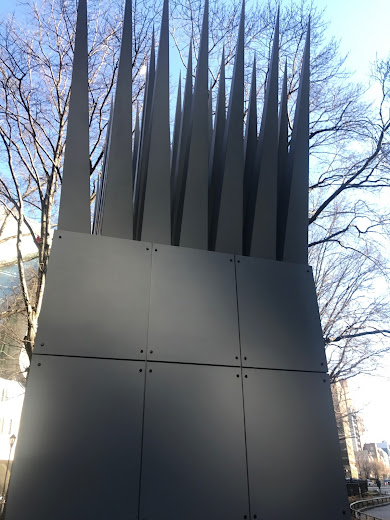 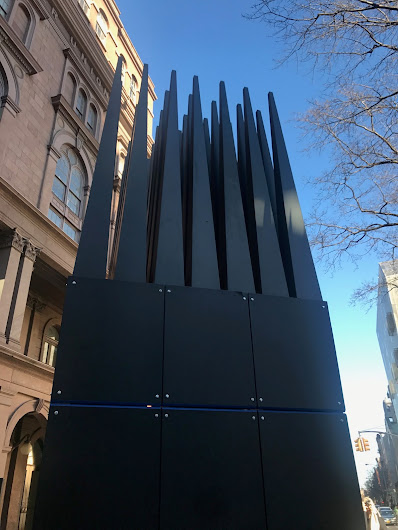 Previously on EV Grieve:
Celebrating the work of John Hejduk at Cooper Union
Posted by Grieve at 2:00 PM

Reminds me of Wilson from Cast Away...

I'll have a large spikey-fries please.

They look like two hulking sentinels guarding The Death Star.

Now it's just a matter of time before an NYU student climbs up there and needs to be rescued by the fire department.

Is that the build for the Donald's Wall for 14th Street?.

It reminds me of those rectangular planters of wheat grass, perhaps an homage to the juice shop trend?

Hmmm... needs tagging for a more authentic something something.

They are political art and do have a connection to current US politics. They do however distract from local politics, which is what everyone is doing now. It's intentional, looks like they care-NOT.

I love the sculptures; I haven't gone yet to see them in person, but I think they're great.

BTW, Anonymous 1:10; John Hejduk is long-dead, so any resemblance to current events is purely coincidental.

How long before corporations have sculptures of their products?

These sculptures have a interesting history going back to the 1969 invasion of Czech. A young man decided to self-immolate in protest, and these were conceived in honor of his protest. They are quietly intense in person. The one with the straight spikes is the son, and looking on with the angled spikes is the mother. You can actually enter the latter through a sliding door and view the son, the suicide, through a slit.