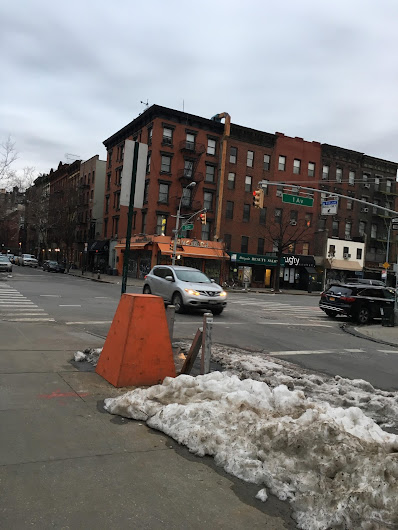 [Reader photo from this morning]

A few EVG readers noted that the pay phones on Sixth Street at First Avenue have been removed... with the telltale LinkNYC placeholder now at the site.

The kiosks continue to make their way to the east, having colonized Third Avenue and Second Avenue...

I think this this the furthest east that I've seen a kiosk... and certainly not the last. The city is reportedly expected to have 7,500 kiosks in place, each replacing a pre-existing phone booth, over the next seven years.
Posted by Grieve at 2:00 PM

I always have appreciated the phone booths in the East Village - I've been able to use them for phone related "emergencies" a few times over the last few years when I didn't have my phone (lost) or ran out of batteries.

and they're used about as often as phone booths.

this phone booth was very important to me (and i assume the others that were in line to use it) during the last couple power failures here.

The last 2 power outages ive been thru lasted 2-3 days and the links battery only lasts up to 24 hours.

i know its a rare event but .. a trusty emergency telephone booth would be comforting to have around just in case..

I don't know how much they are used, but you can make a free phone call from them - I tried it and it worked just fine. No need to have a cell phone with you, nor to be fishing around for change to put into a pay phone. That's got some value, though that plus is offset by the blinding Times Square-like ads on the sides.

They are a ridiculous waste of money. Kind of like those high top counters at LaGuardia Airport with the iPads. So behind the times.

These things are intrusive as fuck, so big and lit, and nobody uses them. Reconfigure. Quality of life annoyance. Looks like an airport.

bring back our friends!

The more saturated our neighborhood becomes with wireless RF, the more difficult it becomes to sleep since the human body interprets these cellular (microwave) frequencies as light.

LinkNYC is my go-to free wifi service for surfing the Dark Web!

Why, just last week my neighbor asked if I knew a good sitter because she has a terror tot that burns through sitter. I said you bet! and recommended a nanny named babyslurryg00d who I "met" on the Dark Web. She must be magic a magic nanny because I haven't heard that baby cry since!

I wonder if those things read any cards in your wallet/bag.
Kind of like EZ Pass insisted their readers only read the gadget
when passing through a toll, but it turned out, no !
Many readers throughout the city were able to read it.
So - are these kiosks some kind of trap ?

@4:01pm: I know it's totally last-century, but you have stated the EXACT reason that I maintain a landline at my home. Everyone laughs at it, until there's a power outage and they can't use their cell, etc. and THEN suddenly I'm very popular ... "can I come over to use your phone?".

Verizon is trying hard to exit the copper wire business. The land line option will be a thing of the past soon enough, whether at a phone booth or in your home. They should replace the phone booths with trees.

These kiosks block the sidewalk, block your sight line walking down the sidewalk, are outdoor lounges for homeless to camp out at.

It's not last century to have a landline. Countless NYC businesses have it. 99.99999% of 212 numbers are landlines. It would be foolish for a business or someone who already pays 2000 or more a month in rent to not have one in NYC considering NYC is ground zero for hurricanes, cell tower outages etc. Yeah you may rarely use it but it's there. I personally would use it all the time to make and receive calls when I'm at home.

@12:12pm: Verizon won't get my copper cable until they pry it from my cold, dead hand. Landline service over fiber-optic is vulnerable to flooding, etc. and Verizon knows it.

Further, @1:21pm is correct: Most big corporations in NYC have landlines and they are not giving them up. Also, given the crappy voice quality of most cell phone calls, it's not clear to me why ANYONE wants to use them - esp. cell phone-to-cell phone calls, good luck deciphering what's being said. If cell phones were all that existed, landlines would be heralded as a great leap forward in clarity.

The only way to be sure of a very good connection is to be on a landline, which is why my landline is staying put. I never use my cell phone when I'm at home, b/c it's frustrating enough to have to use it when I'm out & about.

Please note: fiber optic is only good as long as there's electricity to power it. If your connection is fiber optic and the electricity goes out, you won't have the use of your phone - including fiber optic connected landlines.

Not only big corporations but businesses of all sizes and countless NYC residents like you, 7:07pm, and me.

I think cellphone service is the biggest waste of money out there. Get a serviceless wifi phone and install WhatsApp on it using any phone number including a landline to receive the six-digit activation code, Gmail, and The Weather Channel and VOILA! Now you can send and receive texts and emails, and check the temperature and weather forecast for free. Personally, I don't need anything else when I'm out and on the go,

When I go out to meet someone, I text "heading out" when I am then "here" if I'm at the place we planned to meet first then I shut off my phone as soon as I see the person and leave it off. I tell whoever I'm with I have to check my phone for texts real quick just in case there's an emergency and if there isn't one, I shut it off immediately and back in my pocket it goes for the rest of the night.

The only time I want to talk to people over the phone is at home, and a landline is perfect. I'm the rare bird who can talk on a corded or cordless phone. I don't need to walk all over the house or be in different places while I talk.

So I guess you can say I'm a landline-and-text only guy.