Rise of the 'Empire' — Arturo Vega retrospective through April 20 at the Howl! Happening space 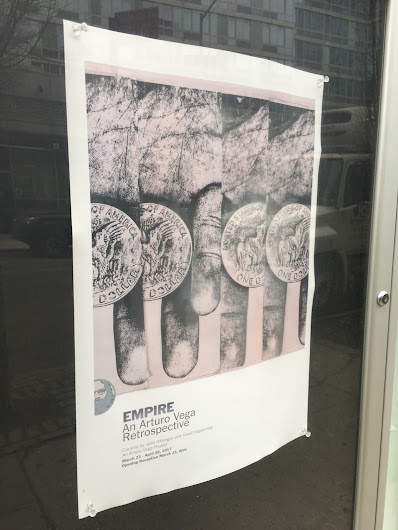 The "Empire: An Arturo Vega Retrospective" debuted this past Thursday at the Howl! Happening space on First Street.

This ambitious survey runs through April 20 and will include guest lectures, performances and a panel discussion exploring Arturo Vega’s broader impact on popular culture while contextualizing his work as a visual artist.

Howl! Happening was established to honor Vega, his life and work, and his support for East Village artists, and we are particularly proud to be the second stop for the late Mexican-born artist’s U.S. museum retrospective. The exhibition features photography, collage and a number of iconic canvases from the artist’s Supermarket and Silver Dollar series (begun in the 70s); his Flags and so-called “word paintings” from Insults; and other series produced during the 80s, 90s and aughts. Of special note is his last major work, Life isn’t tragic, love is just being ignored, a mural commissioned in 2013 that hung on the corner of Prince and Elizabeth streets.

Escaping the repressive violence of an authoritarian regime under Mexico’s “perfect dictatorship” in the late 60s, Arturo Vega made his way to New York City to study English, philosophy and photography at the New School for Social Research in the early 70s.

While working on his first painting series of supermarket signs, he befriended members of the Ramones. Designing the Ramones’ ubiquitous logo based on the Great Seal of the United States, painting backdrops for their stage, and creating a lighting scheme loosely adapted from Albert Speer’s Lichtdom to enhance their effect, Vega created visual imagery that defined the transgressive aesthetic of punk rock by co-opting and questioning symbols of power.

You can check out the Howl! site for dates and times for the panels (there are two tomorrow).

Howl! Happening: An Arturo Vega Project is at 6 E. First St. between the Bowery and Second Avenue. Gallery hours are 11 a.m. to 6 p.m. Wednesday-Sunday.

I still have my Arturo-designed Shrapnel t-shirts from the early 1980s, the guy was a total genius.