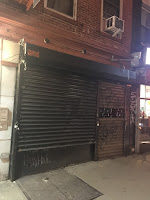 Back in December, Big Lee's (aka the Hard Swallow Saloon) closed its doors for several weeks at 140 First Ave. between St. Mark's Place and Ninth Street.

At the time, some patrons of Big Lee's started a fundraising campaign to help keep the place open while its owners — Leroy "Big Lee" and Maria "Sasha" Lloyd, who are married with two children — sorted through legal issues with the bar's previous owners.

Big Lee's opened in the summer of 2015 in the former Spanky and Darla's (and Cheap Shots) space, which was reportedly owned by Charmion Raymond and Thomas McNeil, whose bar credits include the Village Idiot and Doc Holliday’s.

Allegra Hobbs at DNAinfo reports on what has transpired with the bar.

According to a complaint, the Lloyds in July 2015 entered a purchase and sub-lease agreement with Raymond and McNeil to take over the space.

Per the agreement, the Lloyds paid weekly installments of $3,500, which included rent due under the sub-lease and payments towards the company’s agreed-upon purchase price of $150,000.

In March 2016, Raymond and McNeil demanded an extra $50,000 on top of the usual installments and the Lloyds “uncomfortably” coughed up $30,000, the complaint states.

That fall, Raymond demanded the remaining balance due under the agreement be paid all at once — when the Lloyds refused, McNeil snatched the liquor license that was displayed in the space and Raymond padlocked the premises to keep the Lloyds out, declaring them to be in “default,” according to the complaint.

Big Lee's was able to reopen briefly in December but has been closed of late after its liquor license was deactivated.

As if that wasn't enough...

[T]he Lloyds said they found out that money they had been paying McNeil and Raymond under the sub-lease agreement, which was supposed to go to the property's landlord, had been withheld. McNeil and Raymond were also $54,000 in debt to the landlord in summer 2015 while handing over the keys to the bar, according to the Lloyds' new lawsuit...

Meanwhile, the Lloyds are seeking a new liquor license for the space (CB3's SLA committee gave their OK earlier this month), and hope to be open again by the summer, per DNAinfo.
Posted by Grieve at 4:00 AM

So it appears that Big Lee's was operating illegally with someone else's liquor license, yet CB3 approved them for their own license. I hope this time around Big Lee's is a better neighbor and doesn't BLAST music with their door open into the wee hours.

I still miss the First Avenue Meat Products butcher that was there before the bars. I liked their kielbasa best in the neighborhood.