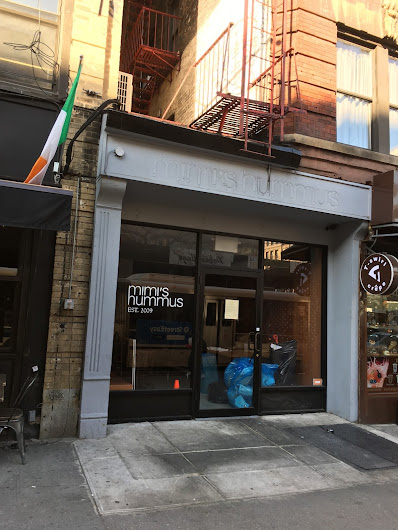 The outpost of Mimi's Hummus at 245 E. 14th St. between Second Avenue and Third Avenue shut down on Monday.

A sign posted to the front door thanks patrons for their support... 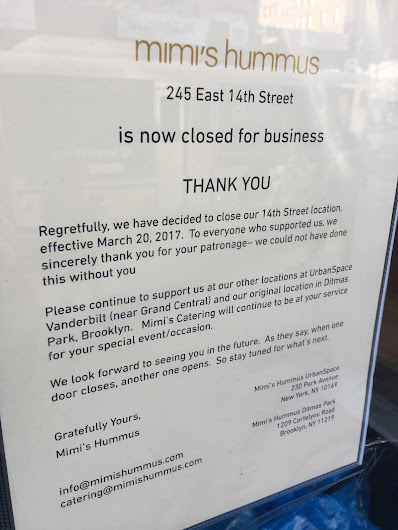 Mimi's opened here in October 2015. The original Mimi's in Ditmas Park remains open ... as does the location in the Urbanspace Vanderbilt near Grand Central.

The quick-serve restaurant serves "some of the city's best hummus and shakshuka" (per Eater). Not sure why they couldn't make it in this spot.

The small space was previously home for eight months to the $1 pizza/BBQ combo of Wicked Wolfe BBQ.

H/T EVG reader Jimmy
Posted by Grieve at 4:20 AM

Email ThisBlogThis!Share to TwitterShare to FacebookShare to Pinterest
Labels: Mimi's Hummus, restaurants that are now closed

With those prices I'm surprised they stayed open as long as they did.

Because that spot is across the street from Halal Guys. As for hummus and shakshuka Mimi's wasn't nearly as good as Dizen Goff.

I actually thought Mimi's made some of the best hummus in the city, certainly superior to Dizengoff. However, their prices were certainly a bit high for me. I lived next door and it was, unfortunately, never very busy.

I also liked Mimi's but that's a tough block. I'm sorry to see them go.

I love middle easter food especially hummus but for some reason I just never thought of this place, could be lack of visibility of the spot, signage. A high traffic location and apparently good food, my guess they were invisible to people rushing by on the sidewalk.

Mimi's was certainly very close to but not "directly across" from the Halal Guys.

Good food, not great. I prefer Hummus Place, too, and now Halal Guys will have a lock. How much hummus must one serve to survive? I'm sorry they didn't make it; what comes next? Does anyone have an idea of how much storefronts like this along 14th Street between 2nd and 3rd go for?

They were a little pricey probably because of the rents, but I thought the food was very good and the people that worked there nice. I will miss going there.

i didn't see this as a rival of halal guys. that's like comparing pizza hut with motorino. the food was very good and the service consistent and friendly. the price point, i'm sure, was a necessity given the rent. too bad.

Where's the love for Mamouns on st. Marks????