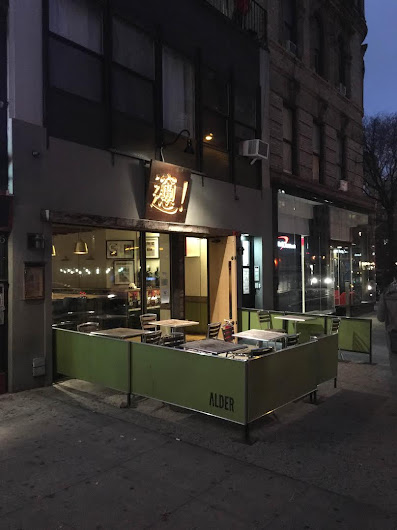 EVG reader Brian P. shared this notice from yesterday at the restaurant between Ninth Street and 10th Street... 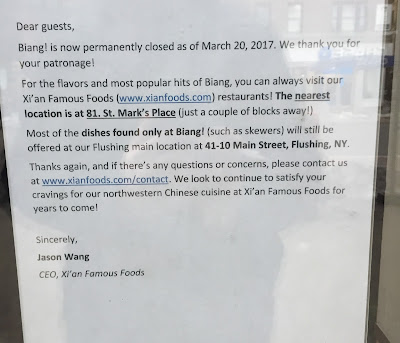 The well-regarded restaurant opened here in December 2015. (And it always seemed crowded.) The sign notes that most of the dishes are available at the original Biang! location in Flushing... as well as the Xi'an Famous Foods at 81 St. Mark's Place near First Avenue.

Wang and his father David Shi started the business in a small food stall in Flushing. There are now nearly a dozen locations of Xi’an Famous Foods in NYC. They also opened Dumpling Spot in Chinatown last month.

The previous tenant at 157 Second Ave., Wylie Dufresne's bistro Alder, closed after two-and-a-half years at the end of August 2015.

Way too sad, I was a regular there. Though the service was inconsistent, the food was great and worth it. If this place couldn't make, I don't see any restaurant surviving in this space.

WHY?!?! This place was amazing and always crowded. I wish they had raised the prices instead. It was way too cheap

My kid and I love this place. I was so happy when it moved in. We are regulars in Flushing...well...as regular as we can be for having to travel to Flushing to eat.

The rent must be astronomical. This is a busy restaurant.

This is terrible news. Why didn't they raise the prices first? And accept tips! It was way too cheap. Such a good restaurant. It will be missed.

There is something off-putting about this space (not just Biang!, but when it was Alder as well). I don't know what it is, but I was never tempted to eat in either restaurant,

Alder definitely seemed aimed at the well-dressed, upscale customer; not a neighborhood kind of place.

And I could never get past the feeling with Biang! that the front sign, showing the restaurant's name ONLY as a symbol followed by an exclamation point, was unnecessary & distancing.

There have been so many...SO MANY restaurants in that space since I moved into the neighborhood in 1987. More than than the usual turnover.

I wonder if there's just something about that building.

Giovanni (@10:03), The Flushing Biang! did indeed close when it moved to the EV, but the space was still occupied by X'ian Famous Foods. So, I think Flushing has 2 X'ian Famous, one at 41-10 Main and one still in the Golden Mall. I last ate in the basement stall there in December I think, but, I've heard it is still there as of February iirc.

I's hard to imagine that a restaurant that's busy cloes. And the flagship in Queens closes too. Must be family/business problems. Good place. Too bad. But sometimes life happens.

I need to get my eyes checked, I live nearby and never noticed this place. It seems I missed a good one.

Thanks Olympia, their notice was worded in a way that made it sound like the Biang! in Queens was still open. It looks like they are folding up the Biang spinoff in order to focus on their very successful Xi'an Famous Foods chain, a smart move.

With that being said, of course the rent is astronomical in the neighborhood, you can't be surprised when things closed. But I really can't see how people think raising the price sounds fair in an already inflated neighborhood. If you just walk a few blocks toward Chinatown, you can get basically the same items for way cheaper down a row of streets with almost the same type of foods, nothing exceeds even $8 there (on Chrystie street, tons of cheap shops.)

$6 for skewers? There's a spot that sells skewers for $1.50, many, actually. You people saying to raise the price are the problem with this neighborhood. One day it's affordable and comforting in every aspect, then the next it's unaffordable and packed with trust fund babies and mid 20's Google employees who throw up after two beers on every street corner possible.

In terms of price of food and the rent paid, EV Grieve reported Dec. 1, 2015 that after Alder closed, the listing for the space was "asking rent of $17,389 plus key money" - that's pretty pricey for a very relatively small space.

And if I remember correctly, Wylie Dufresne said he spent about $1 million to upgrade the space for Alder. That would make for some big key $$.

Also, note that the Biang! layout was filed with CB3 as 16 tables (total of 32 seats) plus a bar with no seats. Again, it's hard to make the rent in a space as small as that. The rent pretty much HAS to drive your prices up.

At what point do you start to direct your scorn at the LANDLORD. Otherwise successful restaurateurs repeatedly failing in a certain space, probably says more about the space.

Or maybe the cosmos just decided that this is not an ideal spot for a restaurant. Which is strange because on paper its a great spot: wide sidewalk, close to the church and the nice block of homes on 10th, plus very good foot traffic.

You realize the $6 skewers at Biang gets you 3 skewers right? You're acting as if it's 4x more expensive than the other places nearby, which it isn't. Not to mention, if the food being prepared is higher quality ingredients, more skillfully prepared, and in a nicer space, it can and should be more expensive. There's a reason why some people prefer Xi'an and Biang to places on Chrystie street.

"But I really can't see how people think raising the price sounds fair"
Fair? What is unfair about people paying a price they deem reasonable for food that they want?

You seem detached from reality.

Biang also included gratuity in their prices -- i always thought their prices were quite reasonable for the quality/amount of food. Like other posters, very sad to see this go. I love Xi'an but hate that it's all styrofoam and take out containers, and really appreciated being able to dine in at Biang. And those hot oil seared noodles... will miss those...