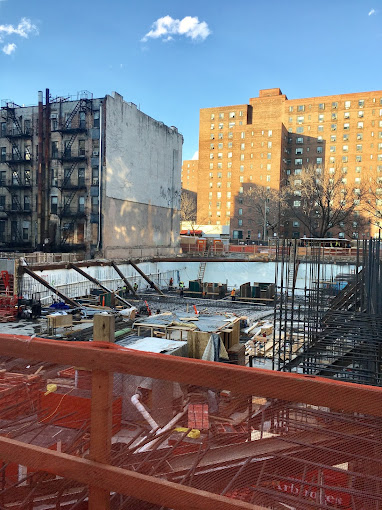 As previously reported, reps for the new development at 432-438 E. 14th St. have been lobbying to receive a zoning variance for a 12-story building — four more floors than the area's zoning allows.

Per previous reports, the site of the former Peter Stuyvesant Post Office between Avenue A and First Avenue "is burdened by a combination of unique conditions that result in practical difficulties in complying with the applicable zoning regulations."

There has been opposition to this variance. Last summer, Community Board 3's Land Use, Zoning, Public & Private Housing Committee issued a denial to the developers (Benenson Capital Partners in association with the Mack Real Estate Group).

Now, however, the developers have cut back their zoning variance request by two-thirds, according to the Greenwich Village Society for Historic Preservation (GVSHP), one of the groups opposed to the new building's height.

Here's more from a statement that the GVSHP released yesterday:

The developers were seeking a more than 50 percent increase in the allowable height and a more than 25 percent increase in the allowable size of the planned development as compared to what the zoning allows for the site. But after GVSHP and dozens of neighbors turned out to oppose the zoning variance request at a Jan. 24 Board of Standards and Appeals (BSA) hearing, this week the developer submitted a revised application slashing the requested height and bulk variances by two-thirds, in anticipation of the next BSA hearing on March 28.

Despite the decrease, GVSHP officials said that "the application still fails to demonstrate that the existing zoning imposes a 'hardship' upon the developer, and still fails to show that the proposed enlarged development would not negatively impact neighborhood character."

Here's a look at the building from its previous 12-story proposal... You can find the revised and reduced variance application submitted this week here ahead of the March 28 BSA meeting.

The Peter Stuyvesant Post Office, which had operated since 1953, shut down in February 2014. Berenson has been the longtime landlord at the address.

Honestly, if the building wasn't so goddamn ugly, I wouldn't really care if they increased the size of it or not. The fact that it's an ugly gray monolith built with cheap materials makes me not want to look at more of it though.

With you on that, @Morgan.

Un fucking real. Why do you get a special way around the zoning? YOU DON'T! I don't care if it's 5 feet. There is no need for you to go outside the zoning. Absurd.

I encourage anyone that opposes this developer's efforts to set a precedent for taller buildings in the future to show up on the 28th and let your voice be heard.

I agree. That building is going to be AWFUL. Look at it! Why do they get the chance to make more money just because they want it? Shouldn't current zoning laws apply, or do they carry the Trump logo or something?

Forget it. It's over. Always has been.
Look at the NYU buildings on 3rd Ave form the 1980s.
Realestate rules this town. Always has, always will.

How about a ZERO increase in bulk? Everybody would LIKE an increase, what makes you guys so special?

They are trying to disrupt the zoning laws. They are trying to set precedence. If they get their variance, it will allow them to nullify zoning. And then no one is safe. They will be able to tear down any building and build as big as they want. NO VARIANCE!

Who knew there was a stream running under this part of the East Village? Answer: Everyone else. Pretty soon this will e a 6 story underground garage with free submarine parking. Agree with Morgan and Gojira, at least they shouldn't make it look like a wall on the Mexican border. From now on, that's going to be mynickname for this building: The Wall.

I just realized that this big ass building will have 2 big sides on on 14th the other on 13th. Oh hell no!!!!

The GVSHP website lets you send a letter to the Board of Standards and Appeals; they have a basic text but you can edit. I just did this and invite all of you here to do the same.

It looks like a giant printer ink cartridge LOL.

Screw them, you can't help stupid people with money. They're the worst look what's in the WH. They knew all the facts before they decided to build on that plot and submit and plan their design of the building. They got approved before so stick to the original approved plan. No special treatment. Protect what's left of the integrity of our East Village neighborhood. Lying rip off Real estate scum makes my blood boil.

That hulking thing looks completely out of place there by itself. At least the Stuy Town buildings have some context.