Celebrating the work of John Hejduk at Cooper Union 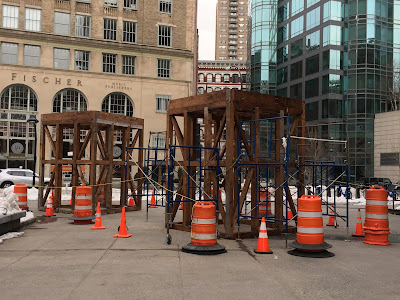 You likely noticed those wooden structures that a crew has been erecting outside Cooper Union. (There were the usual guesses as to what these are — namely wooden prisons used by the Lepharist Revolutionaries, temporary student housing or LinkNYC.)

This is part of a month-long exhibit that starts on March 29.

The exhibition Hélène Binet – John Hejduk Works will present seven of Hejduk’s built works as photographed by Hélène Binet, a renowned London-based photographer who was Hejduk’s photographer of record. Binet’s photographs of both permanent and temporary structures will be presented, including the Berlin Tower, Wall House 2, The Collapse of Time, Security and Object/Subject.

The exhibition will also include a chronology of the numerous realizations of Hejduk’s design for the Jan Palach Memorial, which was permanently installed in Prague in 2016. Comprised of two structures — House of the Suicide and House of the Mother of the Suicide — this work honors the Czech activist and dissident Jan Palach, whose self-immolation in protest of the Soviet invasion of Czechoslovakia in 1968 served as a galvanizing force against the communist government then in power. 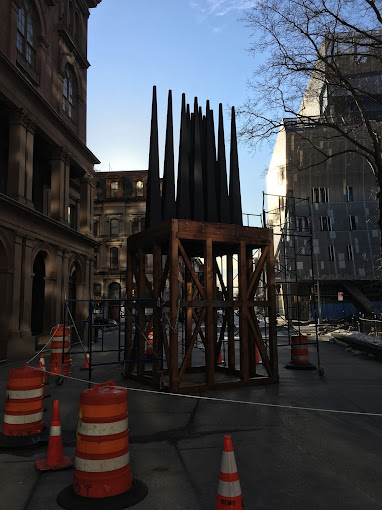 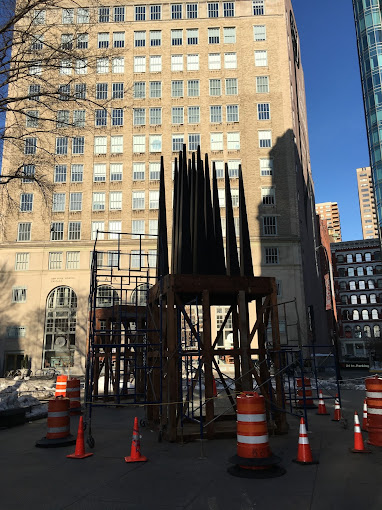 More stuff to crowd up the streets.
It was better before all these seemingly
upscale improvements.

*gasp* The Philistines on this blog don't understand Art? Shocking.

No we actually do understand art on this blog. How it's used to distract from what is really happening.

*gasp* So someone on this thread is actually gullible enough to fall for the over-hyped notion that just because something is proclaimed art, that makes it art? Shocking.

Until you 'updated' them, those looked like leftover bridge supports from some construction project. NOW it's "art".

Of course these sculptures have spiked hairdos, it's the East Village. After a few drinks they'll probably be ready to go get some tattoos.