After 45 years on 1st Avenue, Gabay's Outlet is on the move 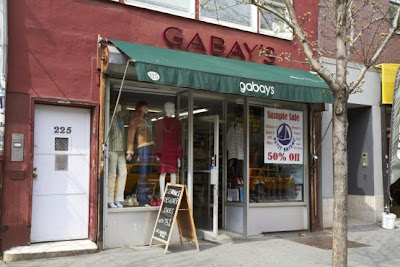 [Photo by Jena Cumbo via Time Out]

There is a familiar reason behind the move.

"We just couldn't hang with the rents," proprietor Joseph Gabay told us on the phone. "We were concerned that we wouldn't even be able to find another space."

The new rent at 195 Avenue A, previously the Spin Hair Salon, is roughly half of what the going rate will be at 225 First Ave. between East 13th Street and East 14th Street.

"We are going to continue for at least another 10 years," said Gabay, the third generation of the family to run the store.

His grandfather Sam, a Turkish immigrant, began selling extras from garment factory floors in a pushcart on the Lower East Side in the 1920s. He eventually opened his own shop at 1 St. Mark's Place in 1940, one of several locations the store would call home in a 10-block radius before settling in at 225 First Ave. in 1970.

"We are thrilled that we are staying in the East Village," Gabay said.
Posted by Grieve at 5:30 AM

I think this might be one of those proverbial blessings in disguise. He may have to stay up a little bit later, but Ave. A on that stretch has a lot more pedestrian traffic. Every time I walk that stretch of First Avenue, I mostly see elderly people from the projects. Nothing against the elderly, I'm one myself. But, as most of them would tell you, we don't shop for clothes very frequently.

These guys sound perfect for one of the neighborhood profiles! Hint hint ;)

I walked by this store just the other day and remembered first seeing it there when I move to the neighborhood in 1981. I wondered about the people that have kept it going for what had to be at least a generation and a half. I had no idea its roots when as far back as the 20's.

I stopped shopping at Gabays because the prices were so high! where's the discount?? I will never forget when I first found them around 2000 and bought awesome Prada boots that needed some slight resoling for $50. I wore them for years! Then I went back and noticed the prices of everything had climbed to the point where you might as well go to Macys or something. Well, ok, I never go to Macys, but still...Cut the prices and you will make up for it in higher sales volume.

Amidst all of our EVGrieve-ing, these stories lately of local shops that find new homes (after rents force them out) are a silver lining that soothes the soul of this mourner.

Gabay's, Gino the tailor moving from 14th to 11th Street. Even that Indian resto that relocated. Gotta treasure the victories too.

Where is Gino now on 11th Street?

I am so happy the store is coming to Avenue A. I think they will get more business. It's a busier strip. It's also great to see a real business as opposed to another bar opening on Avenue A. I can't wait to patronize the new location!

I remember my first Gabay's purchase, a brown satin ruffled poet-style shirt in 1968. Was so sad when they closed the adjacent housewares annex: great deals on bed linens, pots and pans. Well, it's a bit closer to me now, so that will translate into more shopping. So glad it didn't close.

Welcome to Avenue A! Glad to have them! Biscuits and weird hot dogs for celebration.

Just a note on Avenue A retail. Before Gabay's this was a hair salon and before that someone tried to open a wine bar. Residents opposed the wine bar and convinced CB3 that there is plently of nightlife on Avenue A. The CB agreed denied the liquor license application and whether Gabay's is the best place to shop - it is daytime retail something the neighborhood needs more then another high-end wine bar or restaurant or lounge. I don't know why this landlord chose to go another route then holding out for another nightlife tenant, but I hope it had something to do with residents saying "enough is enough". Hopefully more residents will not accept the arguement that the only choice is a vacant store or a restaurant/bar/lounge (because it is a scare tactic used by CB members like Joy and Palitz) and get involved - even if it is only on the street or block they live on.

Thank you all for your kind comments. We are thrilled to be staying in the EV. We live here, work here and love it here. This is where we started.

When I started shopping at Gabay's it was on 1st Ave. between 5th & 6th St. & then it moved to 1st bet. 13 & 14. Joey was a cute kid who used to come in with his father Eddie sometimes. Friday was the day for housewares & I got most of my copper pots at unreal low prices. At 9 or 9:30 each day we would line up around the tables & Rose would pull clothes out of a carton to put on the tables. Sometimes someone would get a top & someone else would get the matching bottom & then there would be a fight to see who would give up their piece. I was so addicted, as were others, that it felt like a big family who knew each other's sizes & styles.

I had no idea of the history of the store; I just remember being excited the first time I went in there and seeing all the apparently-Bloomingdale's-seconds stuff.

I agree with the poster who said they'll be closer to her now; I'll definitely stop in there soon.

I agree with 5:56. I spoke up at the subcommittee meeting on liquor licenses, and will do so again. Even if you do not live on the block, or adjacent, if enough residents complain about the bar-restaurant deluge, committee members will hear it -- though, sadly, whether they respond appropriately is another matter.

As a caveat: even though I spoke up, and many others did, the license and approval went through, later, at another meeting, more under the table. (These bar owners are really really persistent and aggressive.) The restaurant they pitched, even after assurances from the owner of the restaurant, became a woohoo sports bar mid block on a quiet res street. They opened in March soon enough for St. Pat's and on queue appeared three drunk douches and douchette arguing and fighting in the street outside the "restaurant" for two hours in the afternoon.

My mother, Frances O'Brien, shopped at Gabay's from 1950 or so until 1990, when she retired to Long Island. She died recently, aged 96, and I found an original metal sign for Gabay's in her basement.... I plan to bring it in to the store this week. She knew Sam, Eddie and Joey I believe.