Here is the trailer for the Velvet Underground documentary 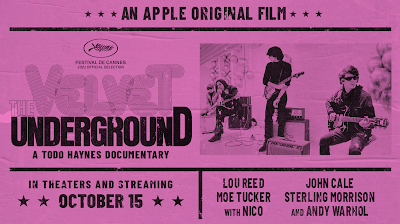 Ah! Been waiting for this... the trailer for the Velvet Underground documentary by Todd Haynes dropped today. (Saw it first on Gothamist!)
The doc debuts on Oct. 15 on Apple+. Here's more about it:

The film features in-depth interviews with the key players of that time combined with a treasure trove of never-before-seen performances and a rich collection of recordings, Warhol films, and other experimental art that creates an immersive experience into what founding member John Cale describes as the band's creative ethos: "how to be elegant and how to be brutal."

Before Apple+, the film will play at the New York Film Festival on Sept. 30. (Tix on sale Sept. 7.)
The reviews were quite positive following its premiere at the Cannes Film Festival.
Anyway, here's the trailer for the band whose birthplace is traced to the LES...
Top image via Apple+
Posted by Grieve at 5:00 PM

Email ThisBlogThis!Share to TwitterShare to FacebookShare to Pinterest
Labels: The Velvet Undergound

It's a rarity for any artist to lay claim to inventing a genre of music. Lou and the VU can lay lay claim to at least four- indie/ alt, punk rock, art rock and drone/ noise rock. As Brian Eno once said, " The first VU and Nico album didn't sell that many records but everyone who bought it started a band." While Lou did bring a strong literary writing element of to rock music comparing literature to pop music is , I believe, a fool's errand. At the end of the day Lou's song craft, and live performances, are the only things that matters. What Lou is not known for, but did exceptionally well, is to fuse elements of blues, soul, funk, and jazz into a rock situation in an almost effortless way. I'd take this documentary with a grain of salt but hopefully it will turn on some younger kids to an uncommon genius and his musical exploration.

@bill- So Lou Reed moved in with bandmate John Cale at 56 Ludlow St. in 1965. Later the band lived at 450 Grand St. Reed never lived on St Marks St but the band often played at the Dom (Polish Home) at 23 St Marks Pl. The light show was credited to Andy Warhol but most likely put together by Billy Name, Warhol's studio manager who also was an original member of the group before it was called the VU.

A book titled The VU NY Art is a good source for the origins of the band and the LES scene in the mid 1960s.

@xtc Enjoy your salt.
It will be shocking if this film is not a masterpiece.