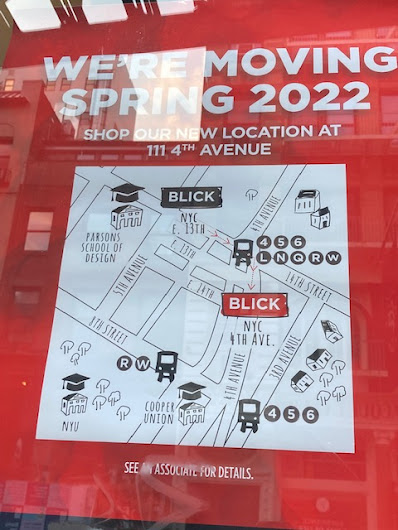 If you've been to the Blick Art Materials outpost on 13th Street between University and Fifth Avenue lately, then you've likely seen the moving notice on the storefront. (Thanks, Doug, for the pic!)
In the spring, the art-supply shop is moving to the currently vacant 111 Fourth Ave. between 11th Street and 12th Street... 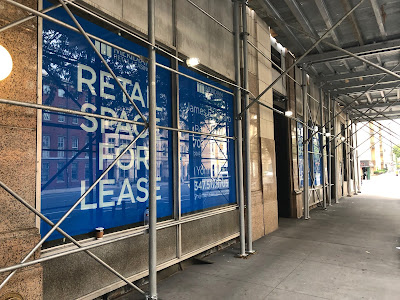 Until early 2019, this storefront was home to Jerry's New York Central.
If we have all this straight: This location was an offshoot of Jerry's Artarama, a 15-store chain headquartered in Raleigh, N.C. Jerry's opened on Fourth Avenue in late 2013, taking over the space from Utrecht Art Supplies (now Blick), who moved into the current space on 13th Street.
Posted by Grieve at 4:58 AM

So glad to have an art supply store in this space!

Just guessing, but would think there are more art students around 4th Avenue area than on West 13th St.

So Utrecht to Blick to Jerry's to Blick again?

As long as they still stock my favorite pen, I'm good.