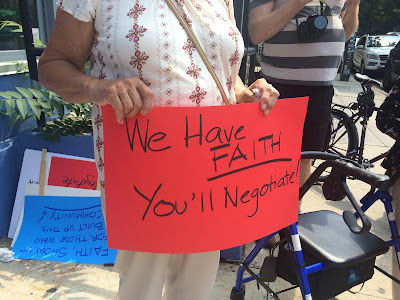 The longtime tenants of 48 E. Seventh St., destroyed in a six-alarm fire last December, are "seeking basic decency" from the building's landlord, acclaimed futurist Faith Popcorn.
During a rally in late July across from the former building on the southeast corner of Seventh Street and Second Avenue, the residents, as well as local elected officials and housing advocates, said that they haven't received any answers from Popcorn (aka Faith Plotkin) on finding new low-income housing in the neighborhood. 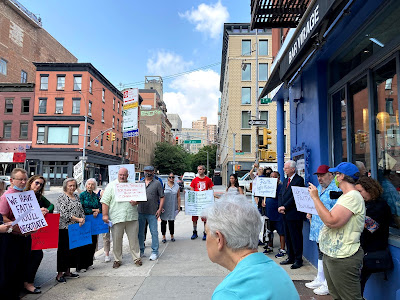 "This building was our home. Three generations of our family grew up at 48 E. Seventh St. and have helped build this community," said Cathy Barna. "Now we are really struggling to find affordable housing in this neighborhood."
The misery for the tenants started in February 2020 when a fire displaced the building's residents. No. 48, which included retail tenants Via Della Pace and Cafe Mocha and eight apartments, was under renovation this past fall and was vacant at the time of the December fire, which also destroyed the Middle Collegiate Church next door.
Before the December fire, the displaced tenants were hoping to be back in the building this fall, according to the Cooper Square Committee, which organized the late-July rally with TakeRoot Justice.
There were approved work permits dated from last Oct. 29 on file with the DOB. According to the permits: "Repairs due to fire; interior non-structural demolition, removal of damaged floor and roof framing, replace damaged floor and wall joists, reconstruct floor and roof joists, reconstruct roof joists, reconstruct roof bulkhead, repair interior stairs ... install new windows, installation of new roof."
The FDNY previously said that faulty electrical wiring was to blame for both fires. Workers demolished the building on Dec. 7.
Now, 17 months out of their homes, the tenants said they want to "open lines of communication and to move forward stalled negotiations."
The Cooper Square Committee stated that many of the tenants are senior citizens who had lived in the building for 60 or more years. Other tenants raised their families here, and all of them have deep roots in the community. (There were four rent-regulated units left in the building — three rent-controlled and one rent-stabilized). Tenants — or their family members — from three of the units spoke at the rally.)
"On top of COVID and dealing with personal health issues, the last thing we thought is that we would lose our home of 60 years," said resident Oksana Lopatynsky.
"All my friends are here in NYC," said Donna Czechowycz. "I'm living in an area where I don't know anyone. It's difficult for someone in their 80s to start over again."
Elected officials also called on the landlord to provide answers to the tenants.

TY to @CooperSq for welcoming me to rally today with the displaced tenants of 48 E 7th Street in demanding accountability from their landlord.

We need Albany to pass stronger housing rights legislation for all NYers. I'll stand with tenants - my neighbors - until it's done. pic.twitter.com/jLagri1wuA

Said Rivera: "I stand with Cooper Square Committee and the tenants of 48 E. Seventh St. to say enough is enough, and that their landlord Faith Plotkin must stop hiding and come to the table with real answers about the future of their homes. These tenants have been struggling for over a year ... They've been waiting, amidst COVID-19, in flux ... and even basic questions about the building itself remain unanswered. They don't deserve this, and we won't rest until they receive the housing justice they deserve."
Popcorn, whose Facebook page lists that she was born in the East Village, reportedly owns several other buildings in the neighborhood.
According to public records, No. 48 has been in the Plotkin family for generations. Her sister, the late Mechele Flaum, was also an owner. The first entry for the building in property records is from 1969, where Plotkin's parents — the former Clara Storper and George Plotkin — took over the building from Rose Storper. 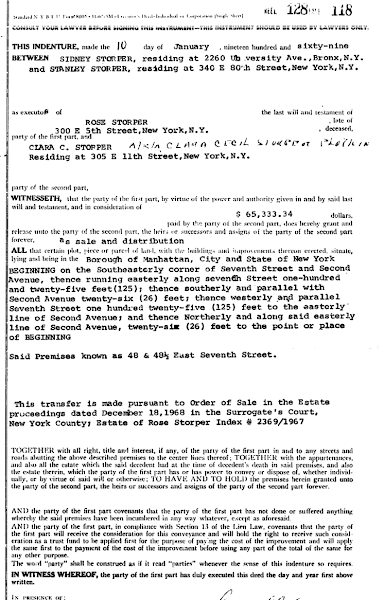 Popcorn is a futurist, author and founder and CEO of the consulting firm BrainReserve. Popcorn's office did not respond to an EVG query for comment. She also did not respond to calls from amNY and The Village Sun, who also reported on the rally and displaced tenants.
"In the darkest days of the pandemic, these community members were also dealing with the destruction of their homes by fire. They had to live through the trauma of not one but two fires," Brandon Kielbasa, director of organizing and policy at Cooper Square Committee, said in a statement. "Now, as these folks attempt to regain a footing, communication from their landlord has become inconsistent and negotiations have stalled."
Photos courtesy of the Cooper Square Committee
Posted by Grieve at 5:30 AM

Carolina Rivera, you need to do more than pose for a photo op with displaced tenants since your effort to stem the gentrification of the LES is no where in site.

I just looked at Faith Popcorn's Twitter account, and she posted about Campbell's soup cans 21 minutes ago but can't respond to her tenants. Unbelievable.

While I feel terrible for the tenants, I’m not sure what they’re expecting from a former landlord whose building is gone?

@10:27am: Do you imagine that the landlord didn't have INSURANCE on the demolished building that paid her big $$$$$, which she appears to be conveniently keeping for herself, instead of using it to re-build or to attempt to make the displaced residents whole?

That's the perils of renting versus owning. She doesn't owe anyone anything. That is why we need to elect people who can make the path to home ownership possible. There is no benefit to renting and never has been, and yet here we are in 2021 and we own less of our lives than ever before. Rented homes, cars, computers, phones, clothes... When you don't own it it can vanish at any time.

There’s a picture of Faith Popcorn with a bottle of Dom Perignon champagne at her house in the Hamptons on her twitter feed, and another photo of her with a bottle of Veuve Cliquot on her way to a Hamptons fundraiser. Maybe she’s just too busy partying in the Hampton’s to notice that her tenants are still homeless. Her whole career has been built on advising Fortune 500 CEOs on how to predict and plan for the future, but apparently she has not applied some of those lessons to herself.

Building is gone. End of story.

Same thing with the exploded buildings on 7th street, once the building is completely destroyed, rentals are over.

Tenants of 50-60 years bemoan loss of apartment but what about this building in owners family for three generations? What do people expect her to do. No building, no apartments to rent. Get real: insurance takes years to pay out. And only pays for replacement. No big checks to landlord. Pure fantasy

Call me crazy, but isn't it the City's / State's responsibility to find homes for these displaced tenants. Oh wait, but the City (NYCHA) has been named the worst landlord for many years now, so yeah, maybe these people are better off without politicians trying to help them.