Chico's tribute to Mom on Avenue B and Houston

Yesterday morning, Chico and friends started their new mural on the liquor store on Avenue B at Houston... 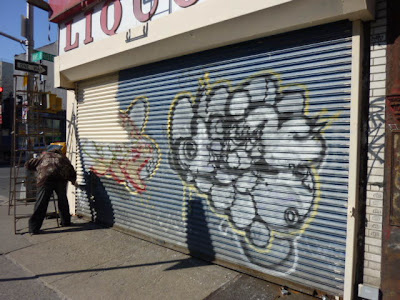 They're also putting up new local ads on Houston... 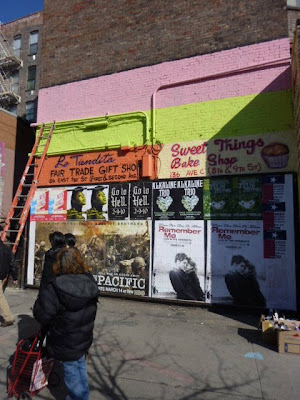 Later yesterday, Chico had wrapped up his work... 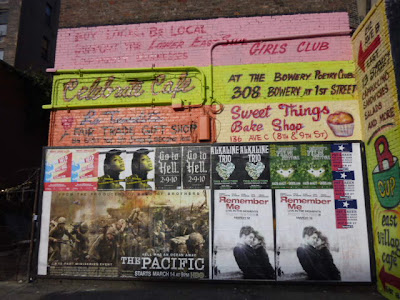 This is a tribute to the owner of the great liquor store here. She passed away earlier this year. 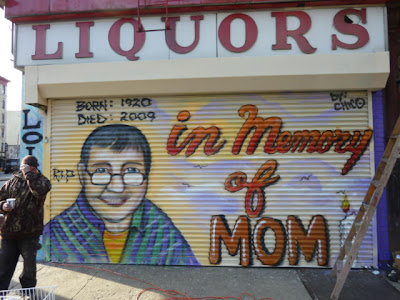 No word yet on the fate of the store. Her nephew is weighing the options, I'm told. Scoopy had an item on this store. As he reported: "The nephew is currently trying to locate the paperwork for the old tenement, the upper floors of which have sat empty for some 20 years. 'Maybe there's some money in the building, a secret hideaway — could be, I didn't say there is,' Chico quipped. As for 'Mom,' he said, 'She used to give everybody credit. She was a hard-working woman. She would lock the gates. She was open till midnight.'"
Posted by Grieve at 7:01 AM

I saw Chico yesterday beginning work on this new piece. Of course I took a photo of him and out it on my blog. Check it out.

Great liquor store? She was a rude ol lady behind thick glass. Not that "great".

Oh but it's old, so it must be great. Fuck outta here.
It's like you and Ray's.

Nice tribute, but looks very little like that slender, rather elfin, woman.
She was always good to me and my partner, even back we were counting out quarters to pay for our purchase.
If you don't know why she was behind thick glass, you must have just gotten here from Paducah.

saw chico painting this too.. i also love the mural "loisaida, much barat" around the corner!

Anonymous - Maybe she was rude to you because you went in with that shit-ass attitude. And BTW, it's cretins like you flooding into the neighborhood who make blogs like this one necessary, offering those of us who truly love the old EV a place to mourn its passing. So go away now. Come back when and if you ever grow up and can appreciate the things that made the East Village great. Oh, and have the guts to put your name on your posts, or shut the hell up.

Glad I'm not crazy - this went up really fast. Walked by Sunday and there was nothing, but there it was in all its glory on Monday. Very nice.

It makes me sad to know all these decorated roll-down gates will disappear soon. To think that tributes like this need are a blight on the city (according to Bloomberg) is disgusting.

I was trying to remember when Chico's 9-11 tribute on A at 14th got covered up by a billboard. You can still see parts of Chico's work. Very sensitive of the advertiser to knock out a 9-11 tribute...

There was also a lovely WTC (not Chico) mural up on the north side of the pub on Bowery, facing Cooper Union, that got covered up by three patriotic paint blotches.

It makes me sad to know she is gone. That was one of the last stalwart places down there.