Valentine's Day tragedies: When you mix up Gramercy Cafe and the Gramercy Tavern

We heard about this third-hand... So we can't verify the authenticity of it. But! A man from out of town was here this past weekend to be with his girlfriend. She is new to the city, and was interested in trying one of Danny Meyer's highly regarded eateries, such as the Union Square Cafe or Gramercy Tavern.

Anyway, some details were apparently lost in translation, and the couple arrived here at the Gramercy Cafe on 17th Street and Third Avenue for an early Valentine's Day weekend dinner on Saturday... 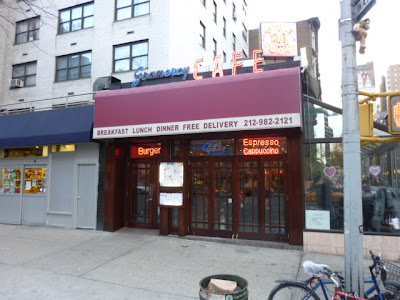 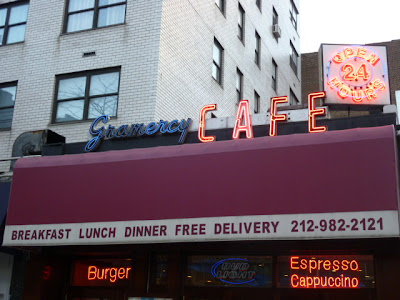 Not all was lost. After realizing their error, they made their over to the Gramercy Tavern on 20th Street near Park Avenue South... they eventually got seats at the bar...
Posted by Grieve at 6:59 AM

This is actually one of my favorite diners around. You can get speghetti, an omelett and a smoothie.

Jacks of all trades, masters of nothing.

I'm with you, Penny. I ate here fairly regularly a few years back... Seemed like I could always get in and out in about 15 minutes -- no matter what I ordered...

If you haven't been to Lyric at 22nd & 3rd, give it a shot--my girlfriend and I live on 18th and are willing to walk the extra three blocks to get better food at a better price...just an opinion.

Lots a love for the Lyric.
And not just at 4AM.

Thanks, good day sir...I always liked the Lyric...just haven't been in some time. I need to revisit.