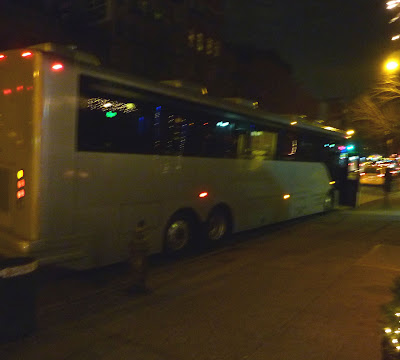 In January I wrote a post about the Rusty Knot Party Bus, which picks up Knotgoers in Williamsburg and then on First Avenue and First Street and plies them with alcohol before they go to the nautica-themed faux dive on the West Side Highway for a swingin' Monday night...

I didn't actually get on the bus. But I was curious!

Thankfully, a Times reporter boarded the party bus... and pretty much answered all my questions... To the story!

“This bus is a little bit like going back to the New York of the ’70s or ’80s, when it wasn’t about the money, it was about the spirit,” said Richard Mark Jordan, an actor from Bushwick who was gyrating in the aisle with friends and high-fiving strangers.

His revelry, while enthusiastic, seemed tame when compared with the crazed riders chanting “Party bus! Party bus!” while pounding their palms on the bus’s windows. Two guys in skateboard sneakers leaped onto a vinyl-upholstered seat, jerking their heads to the metal anthem “Hell Bent for Leather,” air guitars apparently cranked up to 11.

A woman in preppyish attire who in another context might be mistaken for a Congressional aide tried to crawl through a roof hatch, but her progress was blocked by a bolted cover. She had to settle for another form of misbehavior — pouring a can of Bud over a male friend’s head. He didn’t seem to mind.

“This is raging!” said Ryan McGaffigan, a 32-year-old sales manager in a wool cap, plaid shirt and ’50s-style glasses. He had just polished off two Buds “shotgun” — puncturing the can and finishing it in one long swig.

How could it be boring? The bus runs on irony as much as diesel. The basic premise is a cultural inversion: Manhattan tastemakers once sneered at the “bridge and tunnel” crowd overrunning their night spots. Now, they haul them in by the busload.

city of strangers...try meeting people, you might have fun...