We don't know all the details just yet, but Busy Bee Bikes on Sixth Street between First Avenue and Avenue A was shut down by the cops Friday... 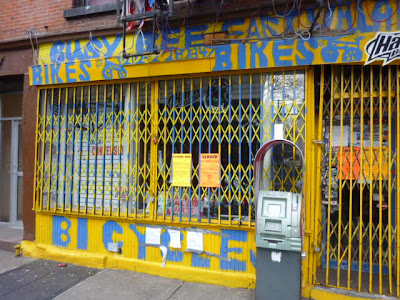 EV Grieve reader Creature, who lives on the block, sent along the photo below... 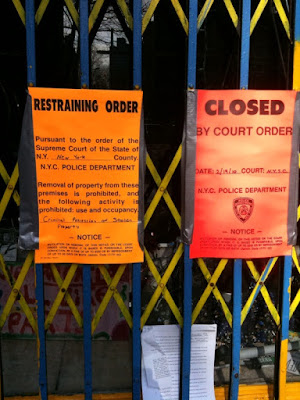 As he noted: "The restraining order mentions criminal possession of stolen property. Innocent until proven guilty, and all that, but it's a shame nonetheless. They have quickly become a Sixth Street staple and added to the overall neighborhood feeling the East Village is known for."

Emey Hoffmann, who owned a number of bike shops through the years, including this one, died of a heart attack on Jan. 7, 2009. He was 63.

Here's a photo of the store on better days... from Ichance on Flickr (via BikeBlogNYC) 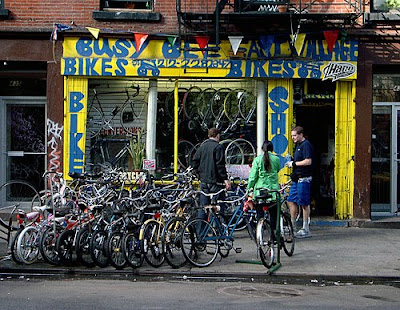 They deal in stolen bikes and supported bike thieves by knowingly buying parts off them.

Emey was a good guy but beginning to lose it by the time he passed away (did he ever offer to show you the laser he was building for the government in the back?).

Continuum (a busy bee offshoot), RAB, or NYC Velo are better options than 6th street.. do yourself a favor and stay away.

This shouldn't come as a suprise.

wow quite an accusation. I thought they got busted for that color scheme

stopped here quite a few times.
good stop for a tube or some air, but thats about it.

Crackerjack mechanic -- best seasonal tuneups i ever had. Also close to the subway... I know you can't survive on being a good fix-it tuneup shop, though. Maybe they should turn to electrics and foldups. Hope they get back on their feet.

fixture of the 'hood that was a reminder of the crime and grime that gave the area its reputation.