Dead drunk in the middle of Lafayette Street (and where's his accordion?) 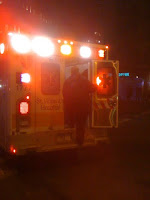 mbrosen shares this story over at Neighborhoodr... Just after midnight in Astor Place, a guy two steps ahead of him passes out in the middle of Lafayette Street, in oncoming traffic. Dead drunk, apparently. So mb gets him out of the street... and we'll let him pick up the story:

We called 911 and summoned an ambulance. While waiting, we and several others that had gathered tried to piece together what happened.

He asked several times for his bag…

What was in it, you ask?

Awesome. I think we have the same parents.