More on the new Museum of the American Gangster 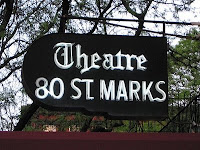 Lorcan Otway, the proprietor of Theatre 80 on St. Mark's Place, passed along more information regarding the new Museum of the American Gangster.... (In the comments in yesterday's post, Jeremiah and I wondered if they'd be showing classic mobster films...)

Yes, we are going to show some of the old mobster classics. The museum will be in the unit above the box office, once lived in by Leon Trotsky. There will be tours of the basement and parts of the theater which date back to the speakeasy days. But, the museum will not conflict with the theater, which will continue to present plays, opera, ballet, film, and more. As far as neighborhood folks. Eric and I are attempting to give a feel to the place, that we both remember when gangsters where still a part of life in the neighborhood. We are not putting a heroic blush on the times, but rather, showing that this is a nation born out of bootlegging and human trafficking, that there is a constant tension between the freedom from and the liberty to... the dynamic between those who seek a nation with no moral ambiguity and those who wish to be left alone to enjoy themselves. The museum will be a place where oral histories will put the story back in history.

Previously on EV Grieve:
On the up and up: The Museum of the American Gangster opening on St. Mark's Place
Posted by Grieve at 6:56 AM